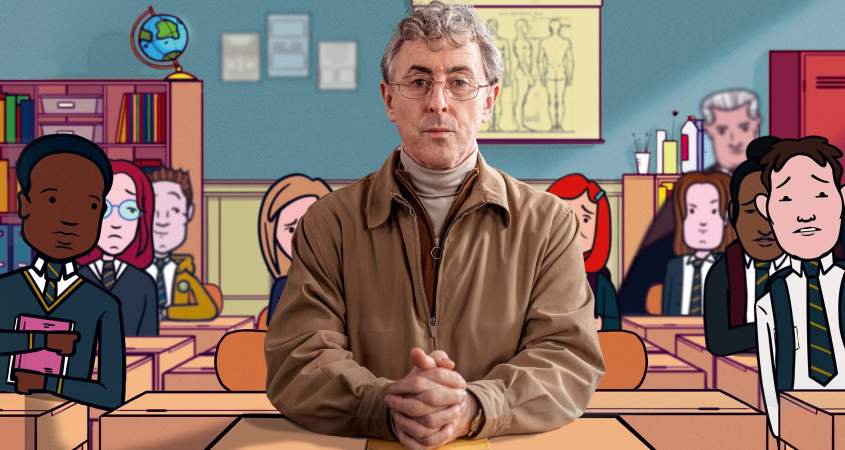 What My Old School reveals inch by inch is a student’s extraordinary ability to practise a fundamental deception on an entire school’s staff and students.  When he first joins the final year of Manchester’s Beardsen Academy from Canada, Brandon Lee is quickly ostracised for being a little different from his classmates, but within several months he develops steady friendships.  He impresses his teachers with his mature approach to study; he helps other students in various ways; he stars in the school’s annual musical.

With top scholastic results, Brandon sets off to fulfill a long-time ambition: to study medicine.

A little down the track, somebody — whom the film hints is one of Brandon’s few confidantes — reveals Brandon’s deception, unravelling everything he has worked to achieve.  And in fits and starts a story emerges of what Brandon was actually doing, to the astonishment of former classmates and teachers alike.

To say more about what occurs would be to spoil the fun — and it is a lot of fun.  But, interspersing interview snippets, cartoon characters, and child actors as the former students’ younger selves, the filmmakers cleverly use the documentary’s format to keep the interviewees as well as the viewer guessing before revealing the tale’s most interesting aspects.

\Warmly engaging, creative, and consistently funny, as a documentary My Old School has no strong parallel that springs to mind.  With open-minded viewing, this record of and multiple commentary on a deception unusual in the annals of school education will leave you to think on the nature of honesty, justice, and reality.