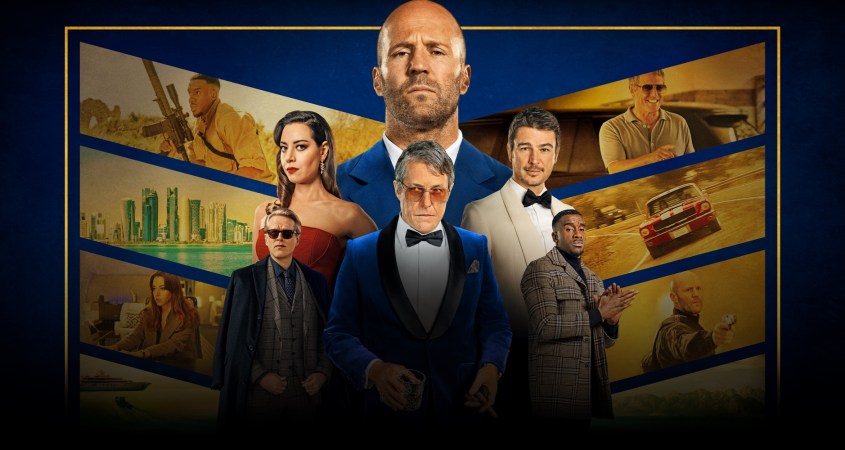 When British Intelligence learns that infamous high-stakes international arms dealer Greg Simmonds (Hugh Grant) is acquiring a nasty package for a $10 billion sale to unknown buyers, it decides that it had better learn the nature of the package and the identity of the buyer and stop the transaction.  But obtaining access to Simmonds’s secrets will require ingenuity as well as top computer, vehicle, and weaponry skills.  Mission coordinator Nathan Jasmine (Cary Elwes) selects the best man for the job, MI6 agent Orson Fortune (Jason Statham), to lead the team and equips him with computer expert Sarah Fidel (Aubrey Plaza), who also knows how to use her feminine wiles to distract, deflect, and deceive, and all-round whiz J.J. Davies (Bugzy Malone).  But they still need a lure… and that’s why they recruit the person Simmonds could least resist: world-famous actor Danny Francesco (Josh Hartnett), to play his biggest and most dangerous role ever: himself.

Jason Statham’s usual tough character is infused, in agent Orson Fortune, with competence, coolness, class, and confidence.  He frequently exceeds his authority, but when he has a job to do he does it.  No hysterics; no long dark nights of the soul.  Josh Hartnett, as pinnacle actor Danny Francesco, perfectly transitions from rude and entitled to near hysterical as he faces going under cover into the home of a man responsible for countless violent deaths.  Managing Francesco’s fears is up to Fortune, who is as encouraging as he’s ever likely to be — not much — and Aubrey Plaza’s cool, controlled Sarah Fidel.  Fidel takes Francesco in hand, steering him in the right directions and talking him into believing he’s a great actor as she accompanies him as a low-key femme fatale.  And the deadly Simmonds even shows a likeable side.  Throughout, Cary Elwes’s Nathan Jasmine, the perfect foil for Fortune, oversees from afar, leaving some room for uncertainty as to his role.

The refreshing sharpness of the characters’ interactions enhances a plot that’s consistently engaging, surprising, and well executed.  From first to last, Ruse de Guerre is a blast.