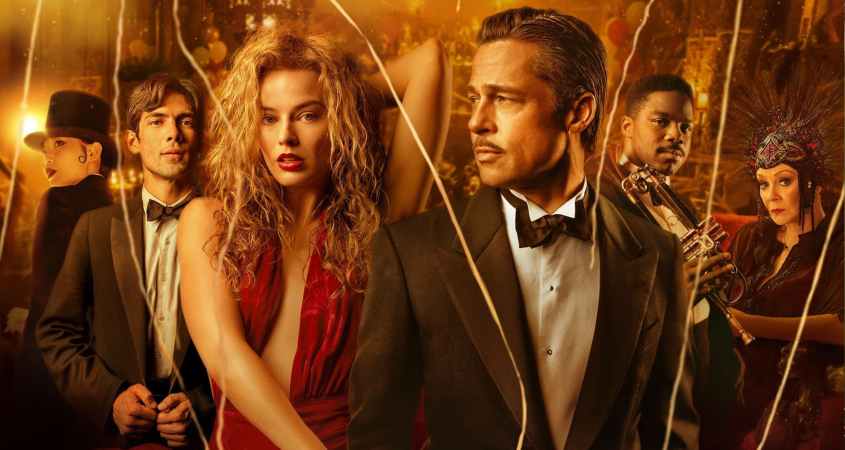 In Babylon, we follow the fortunes of three protagonists, each with special talents and special vulnerabilities: Manuel (Diego Calva), who sees in the movie industry a way to live a larger life, to be part of something with great meaning; Nellie (Margot Robbie), who sees in it the natural habitat for somebody already a star in her own life; and Jack (Brad Pitt), whose production roles in the industry lead him to sweep both of these hopefuls into the Hollywood machine, with opportunities that they may either grasp or strangle.

Saturated in self-confidence, anxiety, talent, self-delusion, vision, competition, ruthless violence, hard partying, and heartbreak, Babylon erupts in personalities at odds, moralities in contention, production companies in competition, and the whirlwind success of the synchronised sound of “talkies”.  The film may strike you as a comic romance between would-be greats and the Hollywood behemoth; or as an exposé of Hollywood hedonism; or as a personal tragedy of Hollywood proportions; or as three intersecting personal tales of rise and fall.  In fact, its very liveliness helps it defy easy categorisation.  Nonetheless, with faultless complex choreography in scenes featuring dozens of actors; spectacular cinematography; unflagging pace; and a soundtrack matching the movie’s somewhat frenetic energy, the movie manages to maintain clarity in its various storylines.

That clarity of story saves a great deal of confusion that might otherwise result, as much of the dialogue, at least in the first half, is anything but clear: whether the fault lies in recording technique or in postproduction — though thankfully it doesn’t affect the rest of the soundtrack — it leaves a good number of lines just a little too muffled — and sometimes too low in the audio mix — to discern.  What fills the gap admirably is the action.

Babylon explores a number of themes, chief amongst which may be the ever-increasing price of illusory fulfilment and short-term insensibility.  However you interpret it, though, Babylon is an invigorating three hours of fun and vicarious excess.