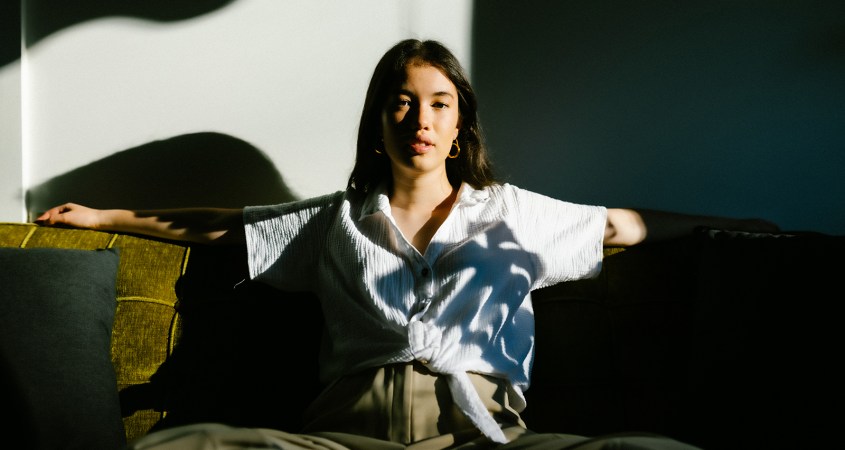 Lucy Sugerman’s last two releases, i wanna kiss boys cos i’m bored and colour blind, were notable for many reasons. Their pop flair, well-attuned production, and self-assured, sophisticated vocal performances to name but a few. The Canberra-based music artist is endearing herself to an ever-expanding audience.

Lucy’s new song, trust nobody, is taken from her forthcoming debut EP, hurt that’s man made. Utilising the personal to create an eloquent cathartic response to a coming-of-age predicament, Lucy has also cleansed and transposed the melodic uniformity of her previous work to arrive at a distinctly suffused, focused meditation on a subject not necessarily strictly confined to the young.

Lucy Sugerman; much to love

The areas to explore here are melodic invention, the surprise arrangement, the considered instrumentation. And, of course, the lyric.

The chorus is strengthened by the sparse verse and the downward glide of the pre-chorus. Its repetitive nature secures our attention and exploits the variations of the lyric. The pay-off at its conclusion, the landing on, ‘I trust nobody’, is both structurally rewarding and afflicted with a firm sense of lament. It’s the kind that disarms, entreats and, naturally, attracts.

Despite its length, a little under three and a half minutes—perhaps an optimum number in pop time—trust nobody feels compressed. There’s only two choruses for one to cling to. The thematic concerns almost create a yearning for more relief. I wanted one more chorus, I needed one more chorus.

Yet perhaps that’s where trust nobody’s power resides. It’s like an escape of breath; a quickening of the pulse.

Surrounding Lucy’s piano-based self-analysis is a well-balanced assortment of expansive sound choices. These choices imbue Lucy’s performance, and the song, with coercive finesse, heightening the essence of the revelations as much as they add a differentiable layer of dramatic charm. It’s the reverberating soundtrack to the heartbreak.

Because this is what we have here, inherent in the title alone. ‘Pull me up closer, I know you’ll disappear’, Lucy intones in the first verse. Like a distillation—or a self-fulfilling prophecy?

A fear nonetheless; a fear that is exceptionally and spiritedly exposed.

You can listen to Lucy Sugerman on Spotify now.