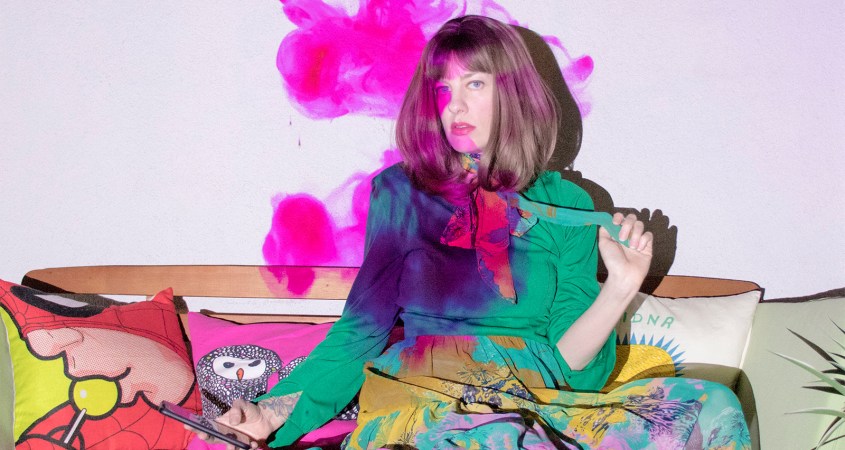 Still, if indie refers to DIY or music that seeks to blur edges, experiment, yet maintain a through-line of accessibility, then yes, indie is perhaps the right fit.

But as the German-born Australian music artist says about her take on her style:

“I write mutant pop, upbeat melancholy, or if I’m trying to change the topic, I’ll just say, ‘indie pop’. I find it hard to describe my own music because I don’t listen to music in the same genre.”

Fanfickk: building a career on a white lie

Fanfickk’s self-produced debut track, Shreds (2016), was instigated by mistakenly bragging to someone that she was working on an EP when she wasn’t. This white lie was the catalyst for more tracks, and the subsequent release of her debut EP Stay Shy.

Fanfickk’s new release Summer Sun is the follow-up to her 2021 track, Everything’s On Fire. Fanfickk’s view of her creative process is as refreshing and nonconformist as her music.

As Fanfickk says about the writing process:

“The most important thing for me is to make music that I personally like. That’s why I never ask people for feedback on what I’m doing because it’s not relevant.

“When I release music, though, it’s in an effort to connect with people. Sometimes it’s a little bit out of spite for people who have tried to dissuade me in the past.”

Summer Sun sounds like its title, with subtle hooks dropped through a cloud of ethereal, textural light like sonic tendrils. As Fanfickk says about Summer Sun:

Aside from the track’s many enticements—the pop hooks, the undulating sonics, Fanfickk’s understated performance—there is a hint of playfulness that resonates from the lyric, and Fanfickk’s dauntless approach; one laced with droll humour.

As she says about her tale of mysterious, obscure love:

“It was inspired by my friends, my cat, and a picture of someone in a garden with flowers. You could interpret it as romantic or aromantic.”

Despite the track’s experimental bent, Summer Sun is delectably accessible and sure to endear many to Fanfickk’s brand of genre-bending pop.