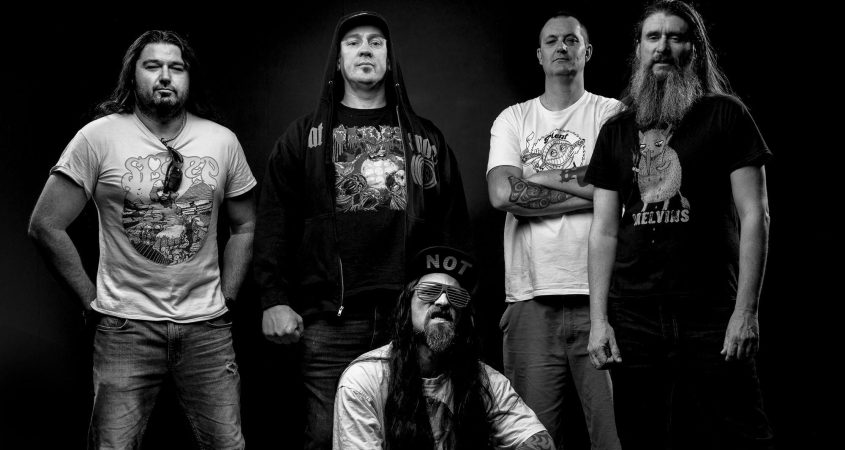 Whew! Nine years? Has it really been NINE YEARS since Pod People blitzed our ears and blackened our souls? Forming waaaaaaay back in a mystical time known as 1991 (a year before a little publication called BMA emerged blinking into the sunlight), the now five-piece are back to wail doomy tidings, with big plans in the works.

The Transit Bar on 13 March plays host to the return of the Canberra stoner doom institution and not only marks the band’s first Canberra show in nearly a decade, but the first show for “new” guitarist Roy Torkington (ex Alchemist) in as much time.

It’s set to be a massive night with Victorian grind super group Remains (fresh from supports with Obituary, Cattle Decapitation and a host of local shows), Hekate featuring Marcus De Pasquale of Witchskull on vocals and guitar, and Point 17 to fire up the night.

We thought it high time to touch base with PP to see what glee they have in store for thee.

Band name origins (how did you form, where did the name come from?):

We formed in Belconnen in the last century. The name comes from the movie The Dark Crystal based on the race of creatures that drank, played music and smoked pipes. Nothing much has changed.

What are some of the most memorable experiences you’ve had?

Tours and shows with Electric Wizard, Celtic Frost, Cathedral, and many many more. And playing lots of Metal for the Brains.

Being the first Australian band to release an album on Rise Above Records.

An EP this year and an album next year.

Racism, sexism, fascism, homophobia, victim shaming, climate denial and everything else that Andrew Bolt and Miranda Devine have to say.

Please come to our shows and have a good time and respect the space and the fellow humans enjoying the riffs with you. And praise hail Satan.