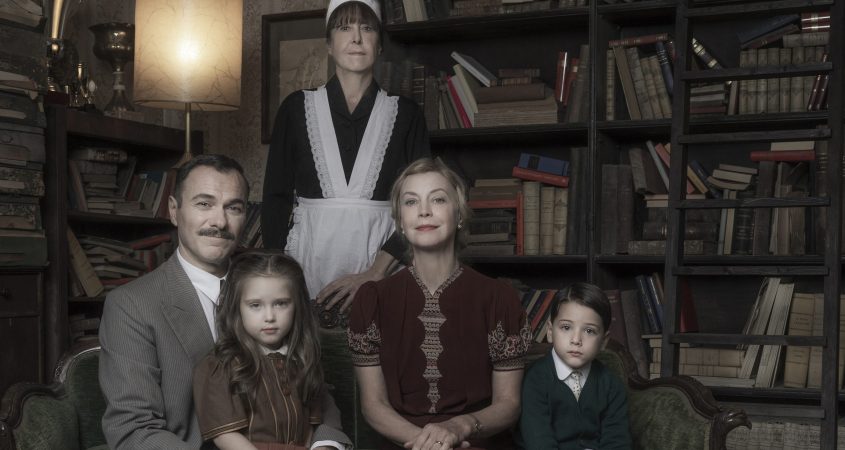 It’s the 1960s, and the successful author Valerio Primic (Massimiliano Gallo) is in his study in the family mansion — the Villa Primic — trying to write.  But his efforts are constantly thwarted by interruptions from the household maid, Bettina (Marina Confalone), who never tires of giving of her wisdom and criticism; Valerio’s wife, Rose ((Margherita Buy), who seems to have given up on having Valerio understand her worries; their son, Massimiliano (Emanuele Linfatti), who is full of angst and blame; and their daughter, Adele (Antonia Fotaras), who has secrets she entrusts only to her father.

Valerio is at a loss.  He is doing what he always has — caring and providing for his family — but no-one seems satisfied.  What more can he do?  And the interruptions of his work aren’t helping.  Not only are they irritating, but after unburdening themselves upon him, his family members take no notice of his response, be it explanation, reassurance, or suggested remedy.  To add to Valerio’s annoyance are unwanted visits by a cousin he despises, Luca (Roberto De Francesco), who hovers around Rose.

Now things have come to a head.  The family’s finances are in a terrible state, because Valerio hasn’t sold a book for publication in years.  Valerio remains unconcerned and reassures the desperately worried Bettina that completion of the book he’s working on will resolve all financial concerns.  The family just needs to leave him to it.  But Valerio’s optimism isn’t enough; Rose tells him that there’s no option but to sell the villa; that Massimiliano and Adele agree with her; that cousin Luca will arrange everything.

As the story unfolds, it reveals the inner worlds of Valerio, Bettina, Rose, Massimiliano, and Adele with great sensitivity and humanity.  Each person’s silent moments let dreams, heartaches, and regrets out into the light — until Valerio’s increasing mystification over his family’s behaviour and his own inability to get on with his work finds an answer that neither he nor we could have imagined.

The performance of every lead in the small cast is riveting.  Massimiliano Gallo inhabits Valerio with tremendous depth as a man who finds in literature illumination of life’s existential questions and who regards himself as a great provider and good father and husband.

Marina Confalone as Bettina, a self-confessed non-reader, is larger than life and in many ways a brilliant foil to Valerio.  She inhabits to perfection the persona of the dedicated maid, as much a part of the family as the rest, and along the way she too reveals her dreams, her fears, and her heartaches.

And Margherita Buy is superb as Rose, a woman devoted to her husband and children and desperate to keep the family home, but aware that something has to give.  The home is in need of repair; money is increasingly tight; maintenance has become unaffordable.  Try as she might, does she have any alternative but to sell the beloved mansion in spite of her husband’s protests?

The Great Silence is the deeply moving story of what a family’s members say to one another, and especially of what they leave unsaid — the little silences in life that lead to misunderstandings and unresolved conflicts and that can ultimately grow into a silence that cannot be breached.

The fading opulence of the magnificent mansion, with its rich, culture-inspired decor, is the perfect setting for this family’s story.  Rose, in her elegant clothes, jewellery, hairstyles, and makeup, is the quintessential lady of the house, whilst both Massimiliano and Adele beautifully represent the fraught journey many young people take on their way to adulthood — the journey from imagining your bright future to living what it turns out to be, and how pivotal their father is to that transition.

A beautifully rendered piece, The Great Silence will leave audiences with much to contemplate.