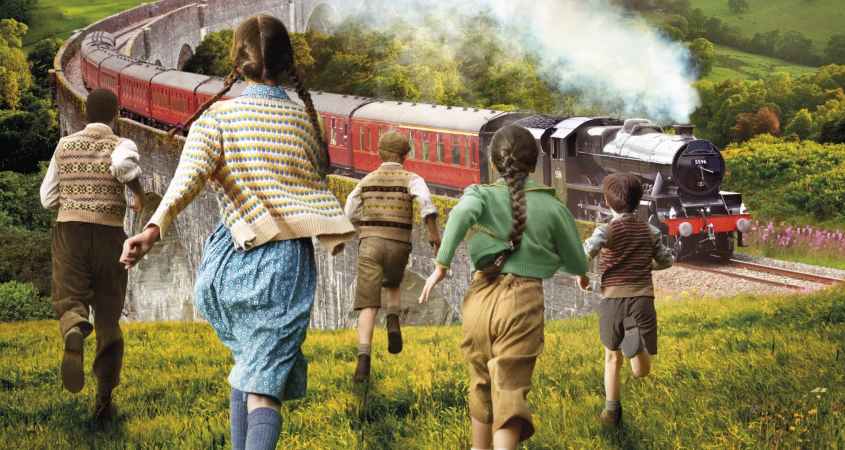 City children are being evacuated to the countryside as German’s bombing of Britain continues into 1944.  Amongst those from Manchester are the Watts siblings: 14-year-old Lily (Beau Gadsdon), 11-year-old Pattie (Eden Hamilton), and seven-year-old Ted (Zac Cudby).

Arriving by steam train in the village of Oakworth in Yorkshire, the children are met and taken in by Roberta “Bobbie” Waterbury (Jenny Agutter), her daughter Annie (Sheridan Smith), and Annie’s 13-year-old son Thomas (Austin Haynes).  The siblings and Thomas soon bond.  From their “hideout”, a disused railway carriage, they band together to spot spies and otherwise defend their country.

Soon after arriving, the children witness some brutal punishment of black American soldiers by American military police, their crime being having spoken to white British women.  When Bobbie’s brother-in-law, Uncle Walter (Tom Courtenay), arrives, the children question him about whether the Americans are friends, without letting on why they are asking.  Uncle Walter imparts much-needed wisdom and understanding to the children, especially to Thomas, whose faith becomes tested.

Not long after the children witness the behaviour of the American MPs, they discover someone hiding in their hideout, and, though terrified, they decide to capture him.  He turns out to be a wounded black American soldier, Abe (K.J. Aikens), on a secret mission; he needs their help, which they readily agree to give.  But things go badly wrong, an understandable lie leads to mortal danger, and eventually the children must find a way to ensure that justice survive the necessities of war.

The “Return” of the film’s title is overtly a reference to both the location and a character, Roberta, who as a child in the original novel (and film adaptations) The Railway Children also arrived in Oakworth with her siblings.  But The Railway Children Return also addresses many of the same existential experiences as the original, including courage, loss of innocence, grief, fear, comradeship, generosity, resilience, victimisation, and our basic humanity during a time of great uncertainty, privation, and suspicion.

The children evacuated during World War II certainly had a harder time in the main than the film portrays, and the film lacks that added depth.  But the acting by the children is credible and by the cast’s seasoned members is very good; the costumes, furnishing, and decor are just as authentic.  The countryside and village are picturesque, and the steam trains, like characters in themselves, are a nostalgic reminder of days gone by.

This film is worth a look, and may leave today’s younger viewers interested to know and understand more about this time of darkness in the world’s history.