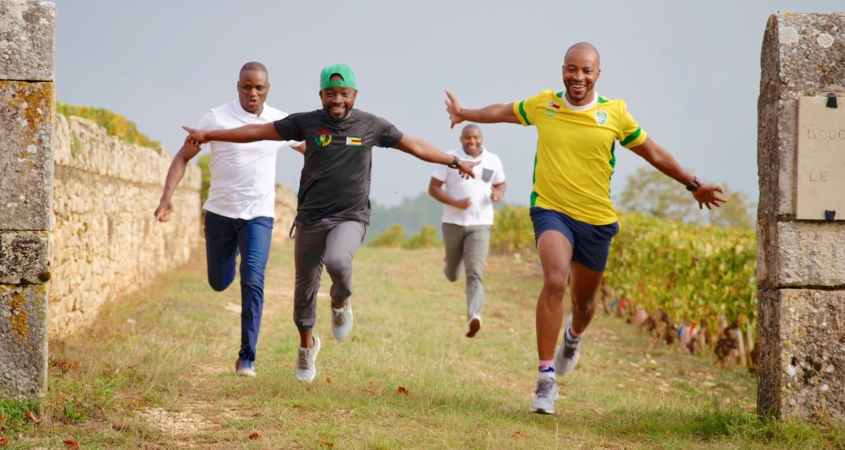 Four young men from Zimbabwe — Joseph Dhafana, Tinashe Nyamudoka, Marlvin Gwese, and Pardon Tagazu — joined many others in South Africa in escaping starvation and persecution under Robert Mugabe’s repressive regime.  In time, each gratefully took up menial jobs before making his way into hospitality.  Through their work, each discovered a natural aptitude for understanding wine, though all were from very religious cultures and had never drunk it before.  Eventually each man became an excellent sommelier.

The four men met and befriended one another, and Joseph formed Team Zimbabwe to compete in the fifth (blind) World Wine Tasting Championships in Burgundy, France, in 2017.  Zimbabwe had never entered a team before, and these young men meant to do their homeland proud.  With widespread support, including from many in the wine industry, they honed their skills and learned to work as a team.  With the help of the competition’s organisers in fundraising for the journey to the competition, they finally boarded a flight to France, where they had four days for mentoring by an old friend in the wine industry, Jean-Vincent Ridon, and coaching by a once world-champion wine-taster.

On the day of the competition, in a very polite but tense atmosphere, the 11 international contestant teams tasted wine after wine, with mere minutes in which to determine a wine’s grape variety; country of origin; region of origin; producer; and year of production — a tough job with offerings coming from wineries around the world, some quite obscure.

Much of the cinematography in Blind Ambition is intimate, giving a close insight into the personal lives of each man and his environment, both at work and at home.  At other times, the camera uses a much larger canvas, taking in the untamed bushland surrounding the huts in the men’s home villages in Zimbabwe and the overcrowded slums of South Africa, and juxtaposing these against the vast, beautiful vineyards and vistas of France and the exquisite architecture found in parts of Europe, inviting the onlooker to feel something of what these young men may have felt stepping from one world into another, possibly unfathomable, one.

Directed by Warwick Ross and Robert Coe, this documentary, whilst not shying away from the harsh reality of life in Zimbabwe during Mugabe’s reign, predominantly focuses on hope, cheerfulness, and the belief that even the impossible can become possible.