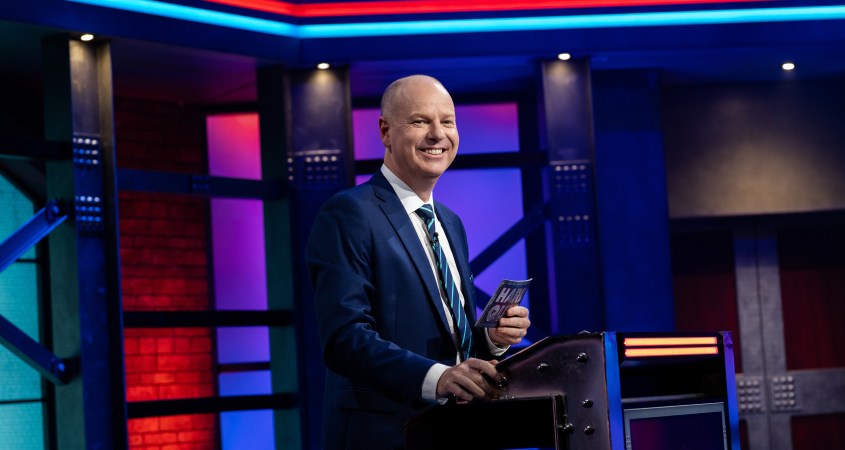 Agent provocateur of ABC TV’s Hard Quiz, Tom Gleeson, chatted for a quickfire 15 minutes about the show, which he is taking on the road in March – April, with the tour opening in Canberra.

“Tom,” I ask to kick things off. “It’s a show on Aunty ABC, with a Big Brass Mug as the prize. But it’s in its sixth season. Why is Hard Quiz so successful?”

“The secret of its success is that basically we’ve made an opposite quiz show,” Tom says. ”When we shoot it, all the things that others would cut out we leave in. If someone says something inappropriate, we leave it in; if I’m accidentally polite we cut it out.

“The contestants are really keen too,” he continues. “Quiz shows are usually full of benign banter and meaningless pleasantries, whereas Hard Quiz is full on sledging. They regularly disrupt my stand-up shows with ‘Excuse me Tom! How come you haven’t processed my application yet?’”

Agreeing with the suggestion that the real prize is the opportunity to sledge Tom, he went on.

“It’s like a panel show for amateurs. People watch those great English shows and wonder what it would be like to be on TV and just say funny shit. There aren’t many shows where you can have a standing start on broadcast TV and say funny stuff and everyone hears it. On Hard Quiz you get to do it!”

Tom believes there’s no pressure because the contestants are primarily there to win the quiz.

“It’s their own subject they are working on, so they feel comfortable. Anything else is a bonus,” he says.

Acknowledging that contestants are nerds in their own area, Tom was a bit soft when asked if the Hard Quiz audience was mainly:

a) Nerds watching a nerd love-in

“It’s all of the above,” he says, in a very un-quiz like response. “Some tune in to laugh at the contestants and sometimes they laugh with the contestants. People just tune in for the irreverence. Nothing ultimately matters; mud gets flung in all directions and people like to see who it lands on.”

We moved on to which element of the show got him going? The quiz, the badinage and sledging, or the opportunity for him to slip a bit into Eddie McGuire, the ABC, or Ita Buttrose etc?

“Well, it’s funny,” Tom chuckles. “We wanted the quiz as an excuse for all the banter and comedy. We could have got a quiz off the shelf and done it in an irreverent way. But it was actually cheaper to make up our own quiz and we accidentally made up a bit of a classic format.”

“So I am actually very proud of the quiz because it works really well. The whittling down of 4 people to 3 to 2, throwing up unpredictable results. It’s rare that you know who’s going to win, down to the last second.”

Hard Quiz Live – Where everything stays in

For Tom the solid Hard Quiz format provides a narrative drive throughout the show. However, he noted that the running time of 30 minutes is a downside to the format.

“If we have a ‘hard off’ tie breaker in the middle and another ‘closest to the pin’ to force a result at the end, you end up losing some of the banter and comedy because the quiz has to remain in the show. Unfortunately, you start to lose some of the fun,” he laments.

“This flow will be a key difference for us and the audience in the Hard Quiz Live show,” he explained.

“Sometimes we have to stop recording for technical reasons or for defamation concerns and we usually edit 45-50 minutes of recording down to the 30 minutes. I often self-edit the banter on-the-fly because I know it’ll be cut or something else will get dropped.

“With Hard Quiz Live, once I start spinning the plates and they’re all up in the air, I’ll be able to keep them there,” Tom says enthusiastically.

“We can just keep going, let the show breathe and be as long as needed. Once the good times start happening, I’ll chase every rabbit down every burrow.”

A Canberran shall be crowned

Recovering from a crack-up at being asked, “Is he going to use real Canberra contestants or was he going to bring in some ring-ins?” Tom responded.

“Yeah-nah, they’re going come out of the crowd. I’m going to give people a real broad range of subjects to choose from and people will be able to volunteer. I’m excited. I’ve only got find a few contestants. There’ll be a lot of people, I’ll probably have to beat them back with a stick.

“The moving parts are great,” he continues. “Every show is different with four new people and four new subjects. The quiz structure is a recognisable form but the way that the four people behave within that framework makes the possibilities endless.

“I mean there’s an episode that’s coming up with an engineer named Darren and his expert subject is bricks!” he chortles. “I’m like, I gotta know more about Darren!

If you want have a crack at winning the quiz, or see if Ken Behrens can hard sledge Tom Gleeson, Hard Quiz Live is on Saturday, 5 March at the Canberra Theatre Centre. Tickets are $79.90 + bf via the venue.