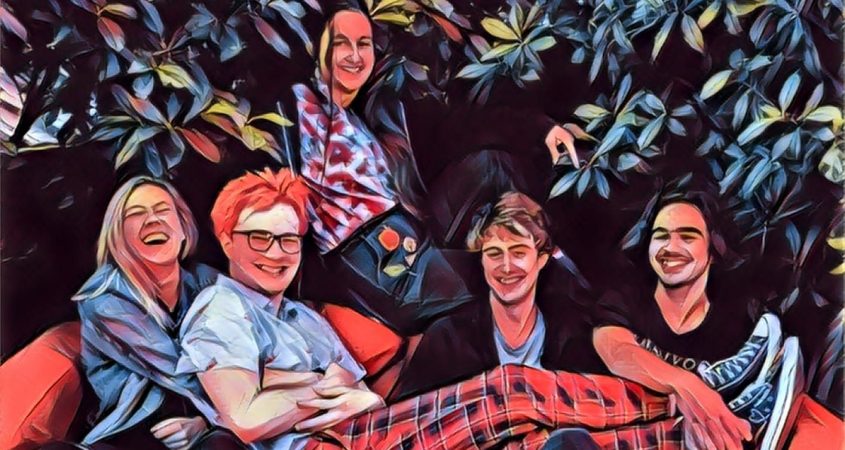 Canberra-based Chins has dropped the follow-up to their last single Back in the 80s, released earlier this year. The new one restates the governing focus of the band, an amalgamation of raw edge and dream pop melodic overlays, and features Madie Cook’s vocal at the helm once more.

It’s a straight-ahead, forward motion groove here and one significantly blanketed by a dual guitar approach. In fact, the ‘signature’ sound of the track—aside from Madie’s voice, of course—is a reasonably well-modulated guitar sound. A flange or a phase kicks off proceedings with a few rounds of an innocent enough chord progression.

This segues into an all-fires-burning condensed power riffing that one imagines would initiate a decent crowd swell.

But we’re soon taken back down, with the verses displaying the band’s penchant for writing memorable melodic lines. When casually and intuitively applied, these create an effective foil for the bustle of the band in full flight.

The alternate tom-based drum groove helps distinguish the parts and adds a sliver of primal colour. One can determine the chorus’s strength after one pass, with the third note in particular (and the chord beneath it) carrying us on a charged-up sustained ride through to the cycle’s end.

The inherently strange punk beauty of Madie’s unenhanced vocal on Eloise is Crying—evident also on Back in the 80s—specifically, the tail end of the chorus, is in keeping with the modulation theme of the track. There are curvatures and inflexions that are more like emotional waves rather than a pitch-perfect assignation of the target.

And anyway, who wants that? What is the target?

There is none. It’s an outpouring, a grief machine, rendering the unrenderable in an abstract fusion of sounds. The verse-chorus times two arrangement on Eloise is Crying is cleaved by two musical interludes, highlighting extemporaneous seeming guitar work, one elevating a heavily reverbed melodic line, the other a series of funked-up chord flicks.

It’s then back to the chorus, which sees the track out—the only fitting way to end the song after all.

Eloise is Crying is a worthwhile addition to the band’s growing output, reasserting their creative energies through a bracing, more than meets the eye new track.