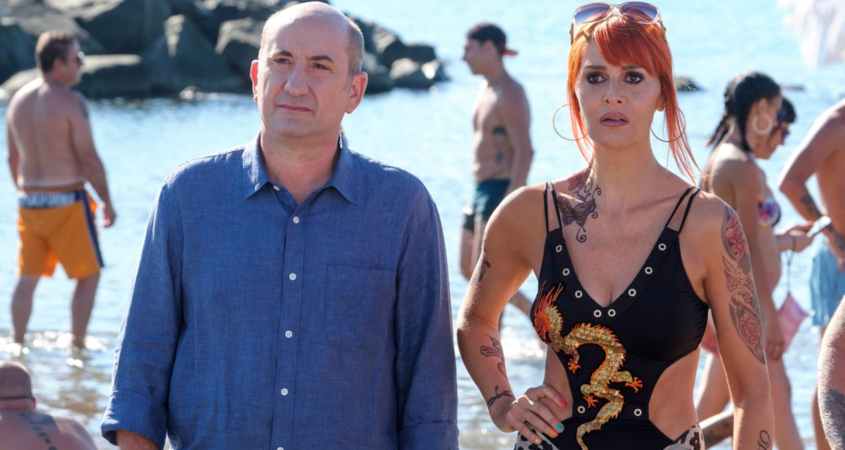 Thanks to her terrible twin sisters’ compulsive larceny, Monica (the incredibly versatile Paola Cortellesi), a highly assertive, loudly decorated woman with a good heart, receives a custodial sentence.  It’s important to Monica to set her son, Alessio (Simone De Bianchi), a good example, so she needs to be free again before he returns from a stay away in Rome — and that won’t happen without intervention.  So she reaches out for help to her ex-lover, Giovanni (Antonio Albanese), a city councillor.

Giovanni becomes guarantor of Monica’s good behaviour in a non-custodial alternative sentence as Monica does her best to minimise the offence she causes by her habitually passionate outbursts.

Like a Cat on a Highway 2 takes good advantage of the natures of its chief protagonists, Monica and Giovanni.  Their respective concerns affect many others around them, expanding what might otherwise be a rather small story into a fable of the power of community and cooperation.

Paola Cortellesi’s capacity to play such disparate roles as recent Italian film festivals have featured her in takes strength from her facial versatility, which Like a Cat on a Highway 2 uses to the full along with many witty lines to convey a character who, though outwardly cynical and tempered by life, inwardly is more interesting and contributes what she can to those around her.

Giovanni’s good nature and capacity to use his job to make the city environs fit for living in are limited only by his concern not to have Monica’s incandescent temper wreck his public persona.  And his concern has good reason, as, between Monica and the impetuously larcenous twins, his career looks increasingly likely to go up in flames.

Chock-full of likeable characters and interesting clashes in perspective, Like a Cat on a Highway 2 offers hours of amusement.