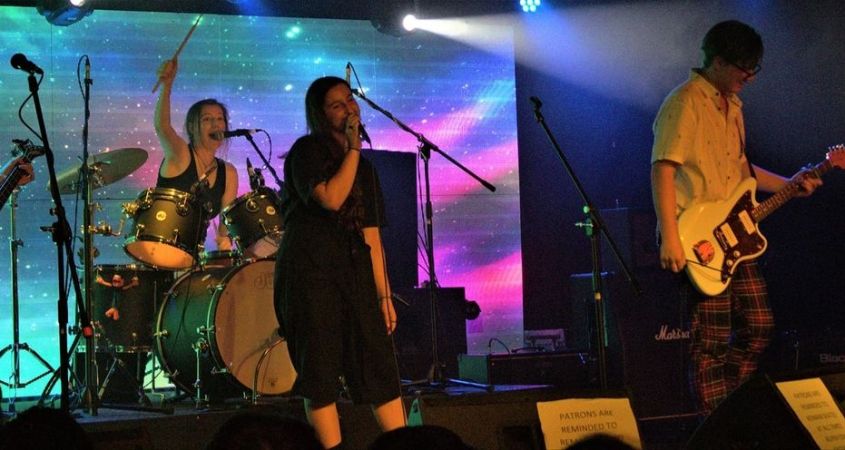 The new track from Canberra-based Chins is an unsuspecting dose of conspicuous ethereality that deflects much of the punk grunge sounding angst of their last releases for a quieter, less noisy disposition.

However, there’s still a discernible level of anxiety present, but it’s deceptive—it resides in a rawness that’s at the heart of the band’s MO.

A two-chord chugging guitar progression introduces us to quite a pleasing temperament, one accompanied by an assumed reminiscence. The song, after all, is called Back in the 80s, and I feel pretty confident there were no such 80s for these kids. Nonetheless, this appropriation is absolved by Madie Cook’s vocal—effortlessly gliding through a series of references and visual snapshots dreamily woven into the fabric of the rhythm and melody.

After a few rounds of this list-like lyric, we are taken down, or up, depending on your taste, by a diverting route, complete with a rushed one-bar count, to a more boisterous space, where, finally it seems, some semblance of raw punk power makes an appearance.

But as much as this rawness is welcome, its deviating characteristics are tricky, merely reflecting a will to free oneself from the shackles of memory, as part of the lyric intones.

Once the song is over, what’s revealed is that the melodic hooks are relegated to the verses and the philosophical tendencies to the chorus. And with that in mind, these parts become interchangeable.

There are also two forms of energy present, the verses making use of a straight drum part, and the chorus’s urgency which is governed by the descending chords and accents. The more strident part of the song has its chief refrain, the line: We don’t need to remember anymore. And so, perhaps the appropriation mentioned above is not the case after all, and the song is a fresh statement of rejection, willing the past to the past and not to some pointless, empty pedestal? Well, I’m up for all that.

As another line informs us, Back in the 80s, we were all kinda crazy. And yes, who isn’t when they’re that young?