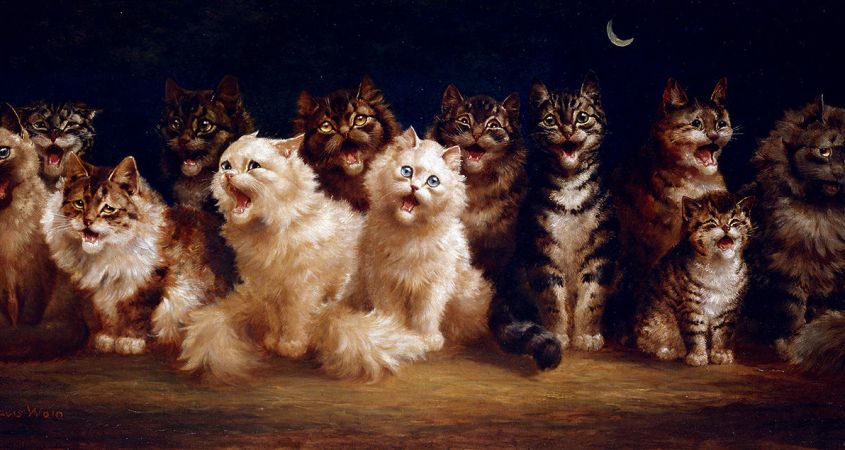 In the early 1880s, an artist, Louis Wain (Benedict Cumberbatch), is painting all kinds of subjects as an illustrator for The Illustrated London News, and his animal pictures powerfully convey something of their subjects’ inner lives.  But advances in photography result in the loss of Louis’s position, forcing him to take on any means possible to generate an income, including pet portraiture, as his mother and five (younger) sisters depend on his income.

Meanwhile, Louis’s private life is as tumultuous as his career.  Finance and organisation not being Louis’s strong suits, continuing tension and arguments prevail.  But it’s the new governess, Emily Richardson (Claire Foy), whom Louis’s mother hires to educate his sisters, who sets the cat among the pigeons: Louis’s disregard of social barriers when he falls in love with her sets tongues wagging.  But Emily’s calm, undemanding appreciation of him and his art frees him for the first time to be himself.

Then into their lives enters someone before whom they are helpless: a kitten they name Peter.  Louis’s paintings increasingly depict Peter and other cats as characters.  And when Louis creates the centrepiece of The Illustrated London News’s Christmas edition, his centrefold of cats as individual characters playing, partying, and carrolling makes him an instant sensation.

The Electrical Life of Louis Wain is intense from the first, and it certainly hasits darker moments.  But, in tracing the course of Louis’s life and career, the film provides an inspiring understanding of the difficulties, both societal and personal, that he faced; his complex relationships; his inner demons; and how his intuitive artistry helped push us along our journey toward full humanity by enlightening and enriching our relationships with cats.