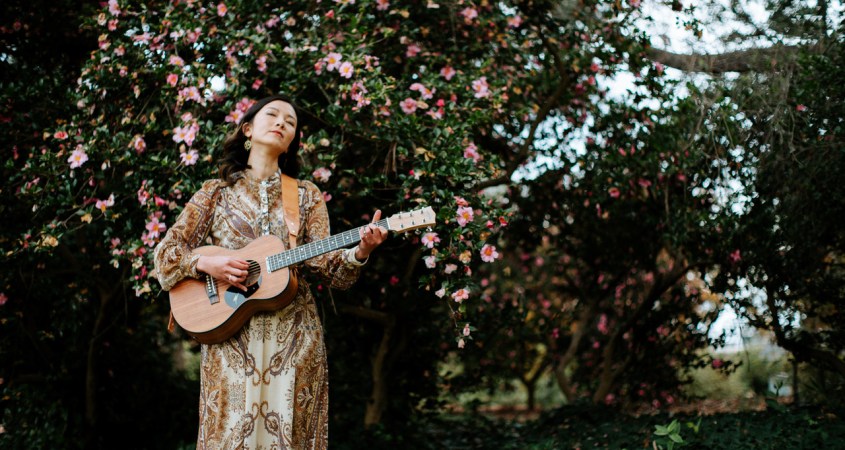 With lockdown officially over, let the Summer of live music begin! Lucky for us, December is already looking jam-packed full of entertainment in the beautiful city of Canberra as Taiwanese-Australian singer-songwriter, Kim Yang, launches her exquisite EP Brave at The Street Theatre. We caught up with the delightful Kim to find out what has been happening in her corner of the world, and what to expect from her upcoming show.

There are few modern-day artists that possess the ability to instantly captivate an audience with their openness and heartfelt honesty. When it comes to folk music, it is hard to find a more genuine artist than Canberra’s own Kim Yang. She is ready to electrify audiences with the highly anticipated live launch of her second EP Brave.

Due to the recent Canberra lockdown, the launch, originally scheduled for September, was postponed. This prompted Kim and her talented musician friends to stage a star-studded virtual gig. This included performances by Evan Buckley, Bec Taylor, Chris Endrey, Sophie Edwards and Lachlan Hawkins.

Kim also made the hard choice to release the EP during lockdown. As a result, she has received national airplay and rave reviews from Double J, AAA Backstage and triple j unearthed. All the hard work was worth it.

The Brave EP was actually recorded during the 2020 lockdown period (it seems so long ago, I know) and the subsequent time that followed.

As difficult as those times were, they appear to have inspired, and even propelled, Kim to capture her most poignant work to date, laying down a collection of stunning and haunting tracks with Guyy Lilleyman at the amazing Amberly Studios in Kambah.

One of the standout tracks, Dominoes, was captured in those dark days, and as Kim explains, it seized upon an unsettling feeling and the uncertainty of the times that, for most of us, was something we’d never experienced before.

“We recorded Dominoes around the time of lockdown, and we workshopped the song together to make it into a fuller, richer sound,” Kim explains.

“The song tells the story of how people who are feeling lost in this whole COVID situation are not alone, and that everyone is feeling self-doubt and uncertainty at the moment. We just have to experience this journey towards our own unique destination and embrace the struggles, because time is so subjective and one day we will reach our destination in our own way.”

Like any seasoned storyteller, Kim’s ability to capture the poetic realism of everyday events in her compositions is quite profound.

Another example is the recent single Garden of Eden, which also features on the Brave EP. The song is a beautiful yet heartbreaking retelling of Kim’s own experiences in the 2019 Australian bushfires.

As dark as the subject matter gets, it still conveys hope in the form of the human spirit and our ability to rise above fear to help others in need.

Recalling the harrowing tale that occurred on New Year’s Eve in 2019, and inspired the tune, Kim tells us:

“Garden of Eden is about my experiences during the bushfires. I was on holiday on the south coast and unfortunately, I became one of those people who got trapped. We were camping at the time, and it was such an eye-opening experience.

“It was crazy, and I was so anxious and angry.

“I actually thought I might not make it out of Eden,” Kim adds. “I talk a lot about the things I’d seen that night, with people showing empathy and checking on each other. We were all trying to find shelter, kids were crying, and I was really traumatised by that experience.

“I wrote that song to give people an idea of what that experience was like.”

Kim will be performing these emotionally loaded songs at The Street Theatre as part of her Brave EP launch, with her new 5-piece band helping to bring the songs to life on stage.

An excited Kim tells us:

“This really is something new for me to be playing with a band like this. I’m so familiar with playing solo.

“I think we’re sounding really great though. People can look forward to this awesome new band sound, and to see us having fun on stage and enjoying ourselves, and some nice merchandise too!”

Adding to the musical mix is the eclectic and enigmatic Evan Buckley of The Burley Griffin, who is the support act on the night.

Kim is clearly excited to have Evan along for the ride.

“I love Evan,” declares Kim. “I think his music is really heartfelt and his voice is divine! When I listen to his songs, I feel like I could cry. He is quite a character.”