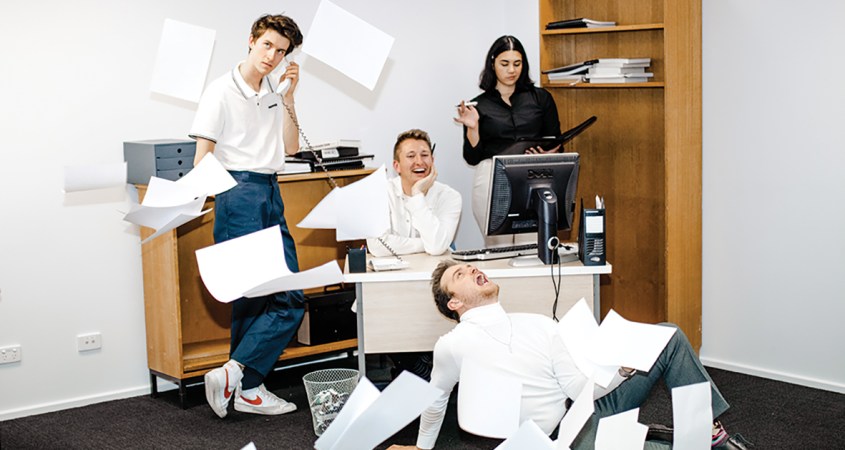 ARCHIE formed in late 2018 while studying at the ANU School of Music. Since their launch at the start of July 2019, they’ve made quite an impact on the Canberra scene. They began with shows alongside well-established hometown heroes but soon began sharing the stage with the likes of Surf Trash, Neko Pink, and BENEE.

It wasn’t long before the band headlined a string of sold-out headline shows around Canberra, confirming a healthy fanbase. Now, the indie dance-pop purveyors have remerged with GREENER, the fourth single for the band.

The new ARCHIE track fuses all the shiny brilliance heard in parts of their previous singles and marries that to a newfound melodic clarity and focus to be found here.

Two forms of musical preludes are established before Grant Simpson’s vocal seizes the spotlight. The first sets out a laid-back groove, where funked-up clean guitars float above a swirl of synth arp and industrious bass lines. These quickly segues into a straight feel. This all certifies the band’s undoubtedly joyful abandon, spiritedly shepherding us all into the zone of dance.

One hears this abandon and is utterly convinced by it.

The fun continues. But it’s quite a refined sense of frolic. Aided by a well-crafted verse-melody, the song grows into an expanse of infectious cheer. Decorated by some Daft Punk vocoder touches and passages of syncopation, which adds a sense of sonic colour and urgent dynamism.

Lines like, ‘I want to run away from here / there’s so much waiting for us outside’, are imbued with an intrinsic depth in this day and age.

Still, no doubt the exuberance that spills forth from this record is also alluding to the sense of freedom one faces at a certain age. Greener is not the sound of youth angst necessarily but perhaps more like youthful appetite. The dizzying sense of wonder is palpable, as too is the groups’ aligned sense of hunger.

ARCHIE has refined itself. They are now armed with an undeniable pop prototype. Expect the band to eager souls, diehard devotees, and innumerable plays and streams for years to come.

[For further ARCHIE goodness, click here for the Running To review]