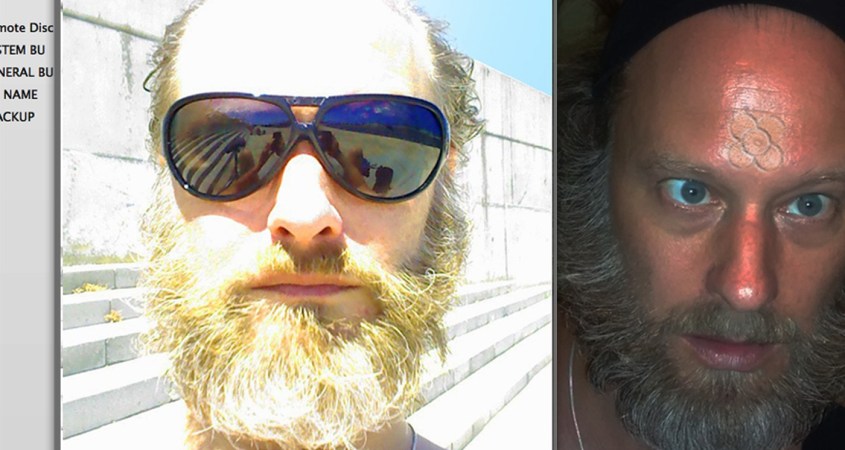 Ben Green is a good ol’ Belco boy who now resides in Bayonne. This vastly glosses over his contributions to music in this city – and his adopted home cities book-ended in the first sentence – that include Melbourne, Berlin and Barcelona.

In some capacity bassist, vocalist, guitarist, turntablist, producer for The Meemz, Three, Prophets of Doom, Slug, Bungzilla, Legends of Motorsport, High Pass Filter, Dr Octagon, Civil Civic, BJ Petroleum and even a luthier for a gorgeous bass that was stolen I believe.

His artwork was a staple of Canberra flyer art in the early ’90s, and his abilities on all of these things added up to a pile of talent that took him on a genre-bending global musical journey that has been a pleasure to witness.

Never one to lazily fall into tropes, he has always operated in an artistic space that I could summarise as “challenging” without any hyperbole. I’ve always admired how he operates in all of these spaces, even when my own comprehension of the creative spaces is limited by my comparatively monochromatic metal ming mong tastes.

It would be remiss of me not to mention, after dropping all those previous works, that this is nothing like any of these records, but somehow a composite of the skills picked up throughout the journey to bravely approach this intensely personal album.

So on Private Benjamin‘s Golden Anniversary – a self described “cuck-rock” album where “confused, beta-male arena anthems abound” – where do we find Private Benjamin? Fresh out of true love apparently.

The record is a result of years of reflection on his “greatest romantic catastrophe (to date)” and while there’s charming refreshment to self-deprecating blurb on the 10 tracks on the Tenement website (the label that hosts this work) there’s some discombobulating, sometimes uncomfortably honest ground being traversed in this thoroughly engrossing listen.

Seamlessly blending electronic elements with tasty guitars when required, and informed and contextualised by the drug abuse that served as a crutch to get through (and perhaps exacerbate) the turmoil, this is not your grand daddy’s break up record.

The album kicks off with a sampler to one of what is a key themes to the record, sleep and deprivation brought on by the collapse of relationship.

This recurring theme is explicitly stated in the drawled time slowed sample underpinning the quasi twilight dreamscape ambience of the opener, but it’s also used as a device several times on the record.

Be it a nightmare like on the hard to pick pulse of Fever or as the healing hide away from loner reality on the wonderful piano driven melody of Captain Schnooze (that almost reminds me of a Kind of Blue era Miles Davis); sleep, or the lack of it, is a tangible narrative device to express the old adage “a sleepless night” our cuck finds themselves in.

As anyone who has experienced the passing of a relationship tossing and turning in repressive claustrophobic sheets, trigger warning – this album is really going bring on some PTSD. If you’ve not experienced it before, this is can be a pretty brutal simulation at times.

There’s a sense of humour that a casual listen might mistake as making the whole thing a bad joke. In delivery, though, true deep blues and profound musical movements expose the self sabotaging humour for what I interpret it is anyway.

The character of the “children’s party clown” at times plays the role of one of the ghosts in this doomed relationship, someone to blame for its downfall. Not many kids party clowns have Private Benjamin’s chops, however.

Osama Bin Luvin a perfect example where our protagonist covers Led Zeppelin’s Since I’ve been Loving You. In and of itself a potentially cringey proposition with the dad joke song title. BUT, there’s a depth to the honesty and real blues on display here that make the guitar playing, the vocal delivery, and sonic palettes utterly compelling.

There’s times on the record that feel uncomfortably raw, but it’s blended with Ockerstralian humour to keep you from feeling too much like you’re in a room watching someone fall apart helplessly. See the end of Fever in the video above for example; an almost harrowing song having the 4th wall broken is clever, witty, and carries a perfect inner monologue pep talk.

This album has a limited release, but it’s a sweeping, brave piece of art that’s deserving of a wide audience, and leaves me wanting to give him a bit of a hug.