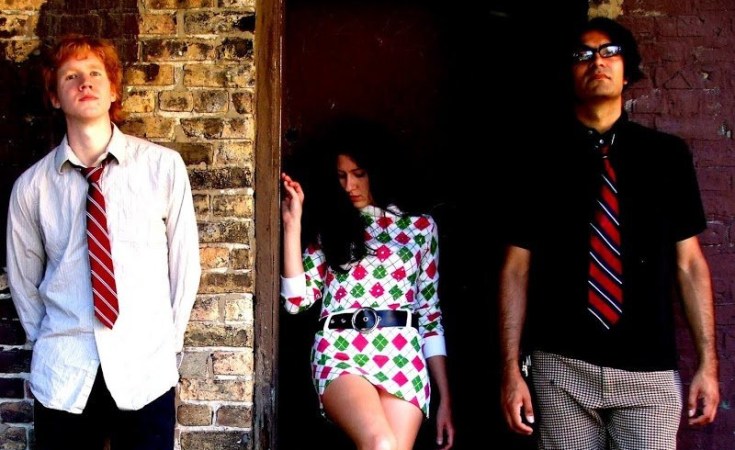 Chicago noise pop three-piece band STAR comprises Shannon Roberts (of bands Future Silence and Gun Creeps), Theodore Beck (of Gun Creeps) and Scott Cortez (of Loveliecrushing and Astrobrite). They rolled out their take on ultra-fuzzy pop with their debut record Devastator in 2016. Taking it slowly, the band went on silent running until dropping a quickie with the single Flesh Eating Mothers in 2018. Then another two years elapsed before this new LP Violence Against STAR.

Following on from previous releases, the new record continues the same shoegaze theme, with vocals and instruments ground up and spat out through a fine gauge shredder. This renders the lyrics pretty hard to understand, without an undue degree of attention. Snippets of phrases can be perceived, but a lot is lost in the buzz saw action of the relentless mixing desk. However, the lyrics on the vinyl sleeve can help a lot here.

There are dark themes in some tracks, wringing out the pain of growing up, as well as fraught relationships. Roberts projects anger in her songwriting, her vocals competing with the guitar work of Cortez and Beck which is thrown into the maelstrom created by Beck’s mixing.

Casting a dark pall, there is a menacing statement at the very beginning of opener Angel School Anthem with, ‘There will be violence’. Despite the threat, this message comes courtesy of a head-nodding beat with danceable qualities. The message is broadcast in the breathy, cotton wool muffled voice of Roberts.

Blonde Sound crashes through with punishing percussion while Artificial Planes blasts out a relentless riff.

Fans of the single Flesh Eating Mothers, with its huge, ear-grinding sound that blasts through like a drawn-out howl of pain, will be pleased to see its inclusion on the album.

Last Star, exuding a slow pace and high-pitched vocals that fly up like departing souls, wears the dark shades of a hymn of mourning, while electro-morphed backing vocals hum along in a monastic chant.

The gentle plucked tune First Grade Still provides a brief respite with its choir like vocals before it is back to business with the short, sharp fuzziness of Cruel.

Some of the best material comes late in the track list. Cock Swan leaps in with an almost conventional rock tune and its Ramones like bounce makes it an album highlight. In Your Arsenal pogoes along too before the choppy rhythm of Teenage Races and the blitzkrieg of Sad Action, which sounds like power pop forced through a mincer.

Rounding proceedings off, White Fear cuts a jugged edge through the atmosphere before Violence Against STAR closes the album with a wild, angry mix.

STAR’s music, which jumps between dreamy and savage, is for those who are not too fussed about getting all the words but who love to be immersed in the overall vibe of the sound. Providing ample scope for bopping along to some crazy (but danceable) sounds, it is the electro equivalent of stoner rock.