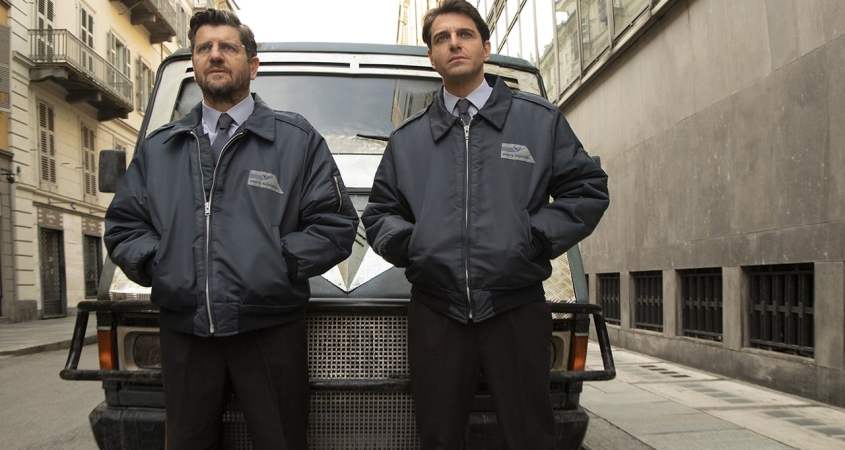 Shortly before his retirement with plans to live the high life in Costa Rica, armoured-car driver Alvise (Fabio De Luigi), along with many others, is hit hard by the news that the Government has effectively added 20 years to the minimum retirement age. It outrages him enough to tell his fellow driver, Luigi (Giampaolo Morelli), with whom he drives an armoured van between banks, that he would like to rob the van. The idea interests others similarly disaffected with their lives, including The Wolf (Edoardo Leo), who co-owns a pub with Luigi; and colleague Luciano (Giuseppe Ragone); and soon a plan is hatched.

Of course, there are complications — some arising from naïvety, others from desperation — and personality clashes; and some of these threaten to set off a conflagration with an extreme prejudice that will be familiar to anyone who has watched a Tarantino movie or two. And Luigi and The Wolf’s poledancing employee Gina (Mariela Garriga) is the wild spark that may ignite it.

Tight camerawork brings you very much into the action, of which there is a good deal; and, with interesting switches in viewpoint, and several memorable characters, Golden Men makes for engrossing entertainment (and a story worth thinking about later) without toppling you completely off your seat. Tanantinesque it may be, but it doesn’t go overboard or hammer you with noise and violence, and it lets you appreciate a few of the important characters’ positions.

Interesting but tricky editing makes characters and sequences challenging to follow, but also hides a plot hole or two until you’ve had time to think it all through later. Regardless, the movie models well several ways not to respond to deferment of one’s retirement.