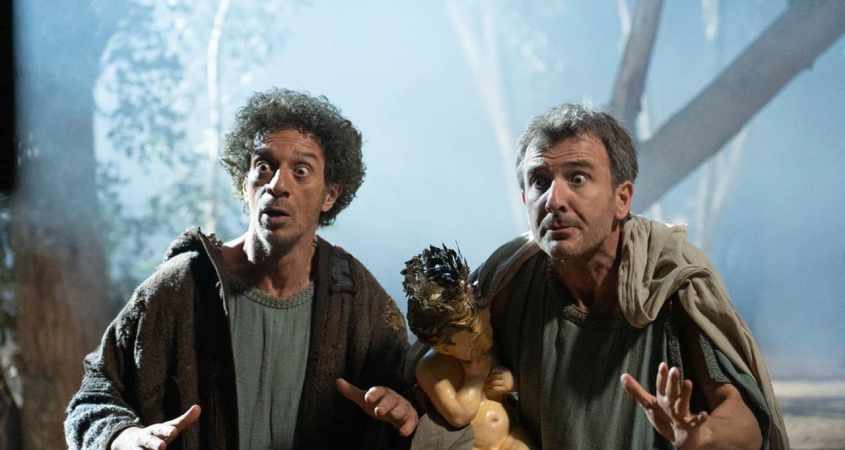 Local priest Valentino (Valentino Picone) has a firm — actually, an immovable — idea of how the end-of-year Nativity must appear for authenticity’s sake, down to the smallest detail, and, though half the village has auditioned, has rejected everyone for the roles — until he auditions the perfect Joseph: Salvo. Salvo (Salvatore Ficarra), an incompetent but lucky thief, has equally firm ideas about the value of religion at all, and nearly succeeds in stealing an antique statuette before Valentino catches him in the act and gives chase. When divine intervention sends the two of them elsewhen, they take a while to realise that all the costumed prospective actors they meet are… in everyday dress; that they have gone from the year 2019 to the year zero; and that they will need a miracle in order to return to 2019. Whilst Valentino seeks miracles via prayer, Salvo looks to the locals for help.

As historical events alter in response to their presence in that time, Valentino realises that he and Salvo must prevent King Herod from killing the soon-to-be baby Jesus. But nothing is as easy as that.

This festival favourite may be the funniest film of the year. Its hilarity arises not from slapstick or clever one-liners (though there are plenty of those) as much as from the outrageous twists that the plot takes: just when you thought their luck couldn’t get any worse…

Picone and Ficarra, playing the leads, also co-direct the film, along with Massimo Popolizio. Both may look familiar from the 2018 festival’s It’s the Law; and in fact every movie in which either has played (of which they have co-directed nearly all), the other has too, and their on-screen interactions have a naturalness that’s essential to convincing comedic roles. And, leaving aside that we only ever see the sketchiest explanation for their time travel and none for their ability to communicate with the locals, that realism is apparent in the scenery, the politics, and the culture in which they find themselves haplessly trying to stay alive for long enough to ride a miracle homeward.

In borrowing a simple science-fiction trope on a theistic mythology, Once Upon a Time in Bethlehem has made rollicking, original cinematic comedy reminiscent of Frank Tuttle’s ageless 1933 comedic hit Roman Scandals. And that’s some achievement.