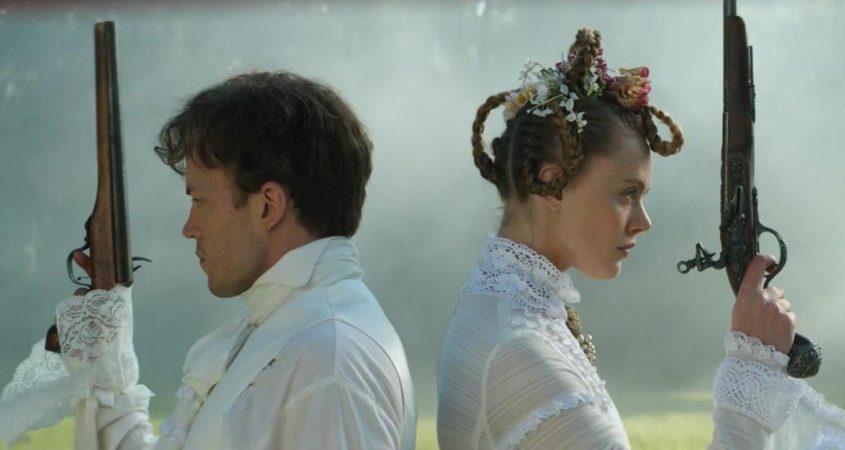 Swoon is far more than the romance its makers bill it as. Set early in WWII, it follows the rivalries between two Swedish entertainment troupes: the Nilssons’, with plenty of money behind it; and the Lindgrens’, on the brink of bankruptcy. Each troupe has plans for expansion; each perceives a threat in the other’s expansion. And yet…

The richer troupe’s patriarch, Gustaf Nilsson (Robert Gustafsson) encourages his daughter, Ninni (Frida Gustavsson), to obtain information from his rival family’s older son, John (Albin Grenholm); and John is encouraged likewise to learn what he can about the other troupe’s plans. Ninni and John are naturally attracted to each other, so of course her father, Gustaf, and John’s mother, Elin (Pernilla August), separately attempt to destroy the relationship. It is Ninni’s mother, Nadescha (Helena Af Sandeberg), whose intervention gives them a chance.

With the tale’s darker aspects including betrayal of a good man to the invading Nazis, and recalling what happened to Romeo and Juliet, the viewer is likely to wonder whether either or both of these North Star-crossed lovers will survive. Fear not: all is revealed somewhat before the end.

Swoon takes a battling family in a fearful period and shows how various characters choose to transcend their difficulties. Though clearly based on Romeo and Juliet, the film is in no way formulaic and for its originality alone is worth watching. As well, the sets are gorgeous, and the leads are perfect in their roles: we cheer the good and boo the bad. What most makes the film special, though, is its seamless weave of reality with hints of magic and touches of fantasy, bringing forth the beauty of living imaginatively and boldly.

See it; you won’t regret it.