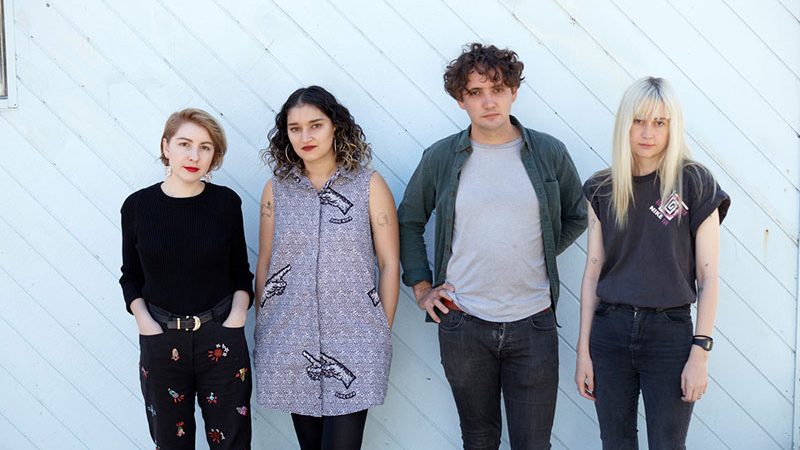 It’s taken five years since their formation, but MAJOR LEAGUES have finally delivered their debut album Good Love. After two EPs, the garage pop group have developed a following who have eagerly awaited this. What took so long?

“Um, ummm, I don’t know,” says singer Anna Davidson. “I guess we’d finished it by like October, November last year and then, yeah, a lot of personal stuff came up and then by the end of the year it wasn’t an ideal time to release it so our manager just kinda told us to push it back until, well, now.” Davidson explains the delay and we discuss how this means the group are now able to head out on their headline tour to support the album.

Given the time between releases and Good Love being a debut album, I thought that some of the songs may have been written over a long period. “The oldest song on there is probably like six years old,” says Davidson. “But most of them are pretty new. We did a lot of demos, like 25 or something, and we ended up ditching a lot of the old songs.”

The album sees the band continuing its sunny pop with a hint of angst. Their sunny sound makes sense to me given Brisbane is their hometown. Davidson sees it as an influence as well. “Yeah for sure, Brisbane is pretty humid and sticky,” she says. “But I lived in Melbourne for a while and I guess writing songs in the cold influenced it a little bit.”

Another nice touch on the album is a voice introduction at the end of the first song, ‘Swimming Out’, that welcomes the listener to the album. “That’s Jared from The Creases,” says Davidson. “Yeah, he came and did some like, backing vocals and a bit of keyboard and when he did that I was like, ‘we have to keep it in’. It’s not on the vinyl but I’m really glad it’s on the digital.”

“You need an album to get overseas labels interested and stuff. So now we have that, we don’t really have an excuse not to go.”

The group are also known for their DIY approach to merchandise and film clips. Davidson cites “90s type stuff” as a motivator for this, adding that her bandmates bring their artistic skills to the table. “Jaimee and Vlardy are both artists,” she says. “So it’s good to utilise what we have and I enjoy making merch. Like, it’s fun and it’s a little bit more special than getting a bunch of shirts printed.”

It’s a philosophy Major Leagues have stuck to since their first days as a band – using what they have and working with their friends. “Vana and I met at uni,” says Davidson. “Jamiee I met just through like the music scene. Like my first band played with her first band and then she knew Jake through a friend of a friend and we were like, ‘want to come on tour’, and he was like ‘when?’ and we were like ‘tomorrow’. That’s how it happened.”

Since then, the band has gone on to garner all sorts of praise for singles like ‘Endless Drain’ and ‘Silver Tides’. The latter was even featured on the Infinity Radio playlist, curated by members of The National. Good Love, produced by the uber-prolific Jonathan Boulet, follows on from the 2016 Dream States EP and embraces the warm, lo-fi garage pop that the band has become synonymous with. With the album out now and the tour booked, I wondered about future aspirations.

“I really want to go on an overseas tour,” says Davidson. “Since we started the band we’ve really wanted to do that and it just hasn’t happened yet, because of money mostly and also ‘cos we’ve had two EPs out. But I think to really make it worthwhile going overseas you need an album to get overseas labels interested and stuff. So now we have that, we don’t really have an excuse not to go.”

August sees Major Leagues playing some of their biggest headline shows to date. The nine-date tour weaves its way up and down the east coast, hitting capital cities as well as regional centres like Ballarat and Toowoomba.

Having first seen the group supporting San Cisco at ANU a couple of years ago, I wanted to know how many other times I may have missed them here, and who else they have on their bucket list to possibly support. “Yeah, maybe twice,” says Davidson. “We’re looking forward to Adelaide cos we’ve never played there and we’re also playing my hometown Toowoomba, so my family will come. Ah actually, David Duchovny is coming over here, we’re gonna try and get the support for that which would be pretty wild.”
I ask Davisdon who, X-Files actors aside, she’s been most excited to play with. It’s a long and growing list that includes the likes of Beach Fossils, The Preatures and Wild Nothing. “That San Cisco tour was really fun,” she says. “But probably the best bands we’ve played with, or my favourites, are Alvvays and Beach Fossils and Girlpool – Girlpool were super nice. In terms of who I’d like to play with that would be like a big list. My all-time favourites are like Stephen Malkmus and Kim Deal.”

Get along to this gig before Duchovny maybe has his way with them.

Support Jarrod McGrath on Patreon!
9% complete
When we reach $500 per month we will begin the official BMA Podcast. This will include interviews with some well-known musicians and artists, tips and tricks for publishing in print and online, as well as other discussion topics around Bands, Music and Arts in Canberra!