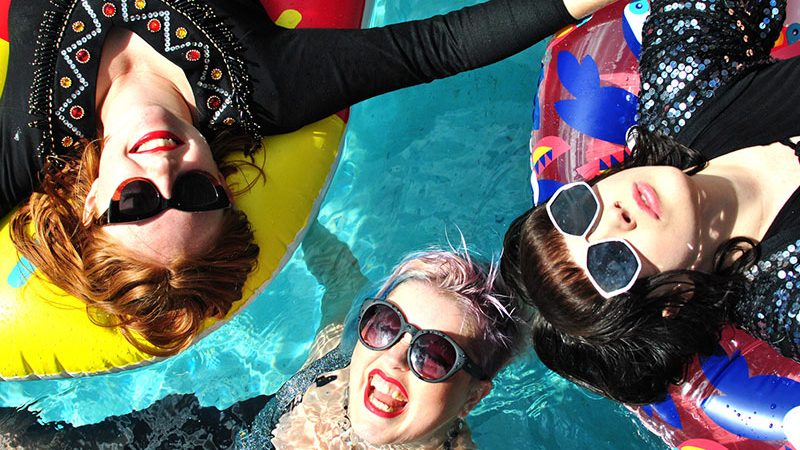 When I chat to WET LIPS, we’re days from the release of their first album. “Maybe it’s nice to have a record of songs we wrote when we were 19 and not crushed by capitalism and the patriarchy,” singer and guitarist Grace Kindellan laughs. Jokes aside, Wet Lips is an autobiography of a band who have a lot to say and don’t care how loud they must be for you to hear it. “It’s really nice to have this record of songs we have played with our friends and to our friends. I feel like it really reflects the bit loose vibe of Wet Lips.”

“Bit loose” is an apt description for the punk trio. Kindellan and bassist Jenny McKechnie teamed up in 2012, later joined by the now-departed Mohini Hillyer. Georgia Maggie now rocks it on the kit. Witnessing, as McKenchie puts it, “men stalking about the stage thinking they’re God’s gift” evoked a realisation that they could do it and they could do it better. “We needed that confidence because people laughed at us, essentially, and dismissed us. It was also a survival strategy. It was like saying, ‘fuck those people, we’re just as good, we’re better, we deserve respect. All we have to get through this gig is each other and if we start doubting ourselves we’re going to give up.’ We would never have gotten through those first few years if we were like, ‘oh no, we fucked that up.’”

“We would have a really terrible experience at a gig and it would make us so angry we would have to write a song about it.”

“It’s a strange situation,” Maggie notes. “You start off all excited and happy and ‘yeah, we can do this too!’ and then as you go on it’s like, ‘ah fuck, what have I gotten myself into.’ It’s changed from just wanting to have fun to wanting to change the whole scene.” Doing just that, Wet Lips immersed themselves in an inclusive Melbourne music community, playing countless gigs in backyards and packed bars. Along the way, they organised a festival of their own, Wetfest, and have even inspired their supporters – such as band Chelsea Bleach – to coin a genre, “wetwave.”

Kindellan is optimistic, and she has every reason to be. “Hopefully now, there’s enough of a community of women and gender non-conforming and trans people who are in bands so all the fresh enthusiastic 19-year-olds can see [them] … and know that they can start bands.”

Rock-dogs, don’t miss out on WET LIPS inaugural Canberra show and/or get your hands on the “first record by a garage band that’s about something other than marijuana and bananas.” They play the Phoenix on Saturday July 29. Tickets on the door.

Liked it? Take a second to support Angela Christian-Wilkes on Patreon!

Support Angela Christian-Wilkes on Patreon!
9% complete
When we reach $500 per month we will begin the official BMA Podcast. This will include interviews with some well-known musicians and artists, tips and tricks for publishing in print and online, as well as other discussion topics around Bands, Music and Arts in Canberra!