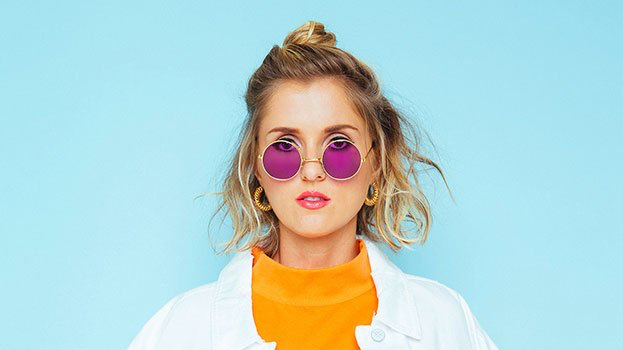 Kristy Lee Peters, more commonly known as KLP wants to set the record straight. First and foremost, she is a passionate singer, songwriter and producer above being a Triple J radio host or a DJ. Yes, her skillset has immensely progressed and broadened through discovering these other talents, but music and performing is where her heart and soul is.

Most people know KLP as the chick that runs Triple J House Party on Saturday nights, and assume that through this love of music she found her passion for DJing. In fact, Peters was formally ‘discovered’ when she won a Triple J Unearthed Field Day competition in 2014 for her own music. Prior to this she was performing from the young age of 13, starting out in a pop group that was signed to Sony. Since then Peters has only moved up in the industry and has cemented herself in the Australian music scene as not only an artist to watch, but a voice for young musicians nationwide. So really, we have it all backwards.

On Peters’ last trip to Canberra she conducted a DJ workshop for young women at Mr Wolf Nightclub. Considering she had previously spoken out against festivals such as Spilt Milk for having male dominated line-ups I was interested to hear about the workshop experience. I wanted to know if she felt a responsibility to other young women aspiring to be DJs, to advise them on how to break into the industry in order to help them achieve their dreams.

“That experience was so much fun, it was really good to see so many people down there and to see women that had never DJed before giving it a go and asking questions and feeling really inspired,” Peters says. “I think anyone getting together like that and talking to each other openly is such a powerful thing. I feel a little bit of a responsibility to help anyone, be it man or woman. I guess if you do have any kind of platform and you feel like you have a voice then you have to make the decision to either be the type of artist that will use your voice or stay quiet, so I definitely try and speak up whenever I can.”

KLP is currently making noise whilst touring the country on her Mix Match tour in the wake of her new single, ‘Changes’, released early June. When discussing with her the highs and lows of touring and being a performer I got some insight into the inspiration behind the new hit single. “Sometimes the hardest things are the things that are out of your control. I really struggle at times to deal with that,” she reflects. “I guess that’s what the song ‘Changes’ was about. It was an experience I was having and I love being in control of everything and being able to push to get what I want … sometimes that just doesn’t happen and you have to be okay with it and kind of put your hands up and go, ‘alright, I can’t deal with this one, I just have to let it go.’ That’s probably the hardest thing.”

KLP has constantly been changing, developing and advancing not just as an artist but as an all-round entertainer. When talking about her experience mixing for Triple J and how she kind of fell in to being known as a DJ, I came to learn that DJing and hosting has just been a means of broadening her horizons and keeping her options open as she advises most artists should do. “I definitely think if you want to have a long career as a performer you’ve got to change and develop, even if you’re a massive artist or in a big band as it’s eventually going to end and you’ll have to figure out what you are going to do next. That’s what I’ve been doing since I was 13, in that pop group, to then writing music with duos, to then doing my own thing, to now DJing and being on the radio, so I’ll just keep doing that and winging it. As long as I don’t have to get a day job then I’ll be sweet.”

Peters really has done it all, from wedding singing to singing in a nine-piece brass band to now working for Australia’s leading radio station for independent music. While she says the experience has been amazing and referred to it as a “dream job”, it has also been frustrating for her. “They all just think I’m a DJ that’s suddenly decided to do music and it’s like, ‘no man I got the job on Triple J from my music’. That’s how that relationship came about, from the fact that I was a producer and I was a singer and I was doing all that, so it kind of is a bit of a strange one trying to re-educate people on your history and what you do but it’s okay, everything’s a nice challenge.”

Whilst Peters’ roots are in singing I think we can expect to see lots of things to come from her over the next few years. The rollercoaster ride of being a performer, she says, is something you get better with over time and the art is in adapting. “The more you do anything the easier it gets and the better you get at kind of doing that, so hopefully by the time I’m 50 I’ll be a genius at it all.”

Watch KLP mix it up on her Mix Match tour on Friday July 28 at Mr Wolf from 10pm. Supported by MIA SØRLIE, GENIE and INDIGO. Tickets at the door.

Liked it? Take a second to support Lucy Croke on Patreon!

Support Lucy Croke on Patreon!
9% complete
When we reach $500 per month we will begin the official BMA Podcast. This will include interviews with some well-known musicians and artists, tips and tricks for publishing in print and online, as well as other discussion topics around Bands, Music and Arts in Canberra!