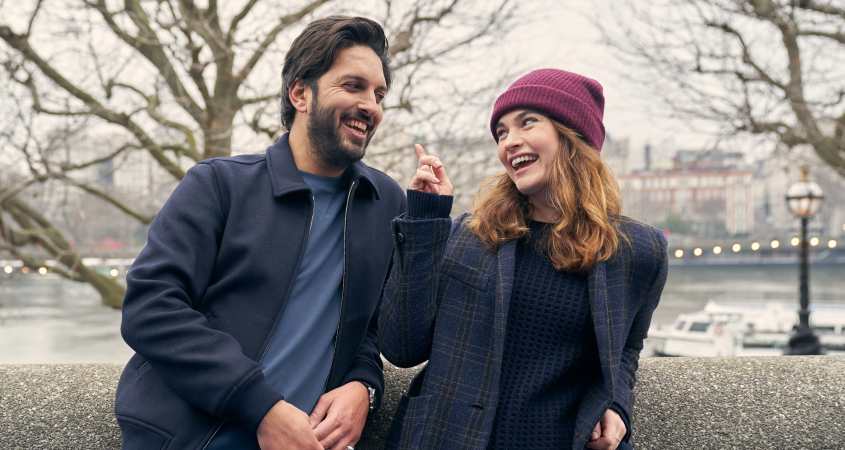 The long-time close friendship of young neighbours Zoe (Lily James) and Kaz (Shazad Latif) takes a surprise turn when Kaz, an oncologist, tells Zoe, a documentary filmmaker, that he’s going to get married but doesn’t yet know to whom.  He has decided to take the traditional route, as his parent did, and have an “assisted marriage”, arranged by his parents, as he sees value in trusting the wisdom of his parents and the traditional values that will underpin their selection — with his involvement — of a potential bride.

When Zoe likens the prospect of learning to love a stranger one has married to Stockholm syndrome, Kaz challenges her in turn with the observation that she sets out consistently to pair up with men who are totally unsuitable for her.  And Kaz is not the only one to believe that Zoe deliberately keeps love at bay: her mother, Cath (Emma Thompson), fears that Zoe will always be alone.

When Zoe’s usual production house, led by Amir (Yassine Anaddam) and Olly (Ben Ashenden), suspends Zoe’s latest documentary-film project due to its lack of appeal to a young multicultural audience, Zoe spontaneously suggests that she create a documentary on the process of Kaz’s assisted marriage.  It’s a suggestion that goes down well.  Zoe need only overcome Kaz’s reticence to expose so much of his personal life.

When Zoe accompanies Kaz; his father, Hahid (Jeff Mirza); his mother, Aisha (Shabana Azmi); and her own mother to Pakistan to meet Kaz’s bride to be, she goes as Kaz’s friend and as his documentarian.  Despite her doubts, she is fully supportive of his decision.  But has Kaz resolved the contradictions between his own values and the traditional values to which assisted marriage subscribes?

As its title may suggest, What’s Love Got to Do With It? explores the tensions between romantic love and family love; inherently it also touches on intergenerational change and intercultural influences.  But it makes no attempt to explore such issues with any seriousness.  Rather, it touches lightly on them as fuel for pathos, inner struggles, cultural conflicts, and laughs.  It offers few answers and indeed may to an extent reflect the same confusions it raises, being unsure of its target audience’s life experience, values, and wishes.

It nonetheless works, and for this we can largely credit submersion in their roles by Thompson as Cath, a mother who, living her own life to the full, is filled with concern for the future of her daughter, and James, who brings the daughter, Zoe, to life as a young woman afraid of giving her heart away.  Add to Zoe’s romantic insecurity the uncertainties of Latif’s Kaz, with a medical specialist’s express confidence, and you have a tale ripe with humour, a tale of two protagonists made to confront their demons against backdrops of community support and warm domesticity in both England and Pakistan.  With lead characters we care something for, a boppy soundtrack, snatches of uptempo subcontinental dancing, and a feel-good ending, What’s Love Got to Do With It? rewards its audience amply.