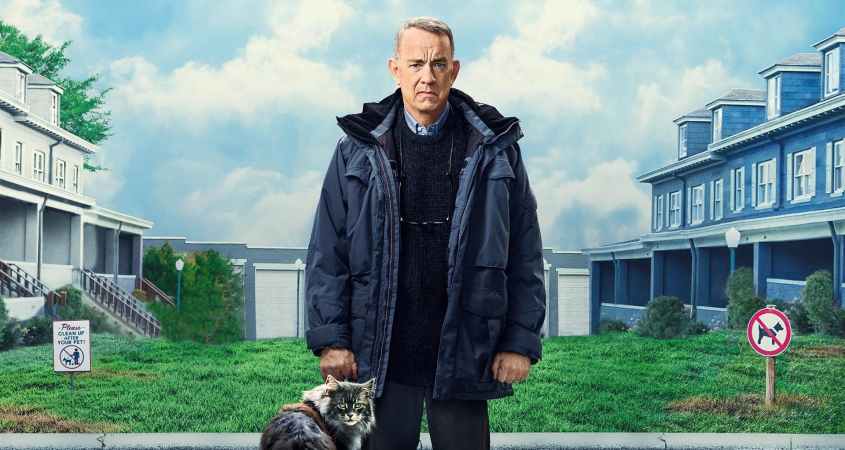 Otto Anderson (Tom Hanks) is angry — as angry with the kind, the thoughtful, and the relentlessly cheerful as much as he is with the incompetent, the disrespectful, and the money-grubbing.  In fact, Otto is so angry that he wants no more of the wasteland that his life has become.  When the woman he has adored since he laid eyes on her in his youth — the woman who gave his life meaning, purpose, and joy, and whose love was the greatest any human can hope for — is no longer with him, Otto sees any future without her as meaningless.  Joining her in death is all he can look forward to.  And he can’t wait to be welcomed into death’s arms.

But life can be an interfering force, and Otto finds his plans thwarted time and again as those around him manage to entangle him in their daily ups and downs, their little tragedies, and their bigger heartbreaks, leaving him with no choice but to reluctantly become involved until he finds his anger redirected and a purpose in life returning.  Chief amongst the perpetrators of life-affirming interferences are the new neighbours: Marisol (Mariana Treviño), a vibrant, loving, compassionate and larger-than-life woman who won’t take no for an answer, insisting that life be lived no matter what; her fairly useless but good-hearted husband, Tommy (Manual Garcia-Rulfo); and their children.

Tom Hanks as Otto is as superb as you’d expect, exuding heart-wrenching desolation through facial expression and body language when he is alone revisiting through flashbacks his life with his beloved wife, Sonja (played by Rachel Keller), and fury and intolerance toward everyone he encounters beyond his front door, including a stray cat.  But Otto’s transition to healing is so masterfully natural and gradual that the viewer is able to make the slow transition with him.  Hanks’s performance leads the viewer to feel that Otto will never recover from the loss of Sonja, that she will hold sway over his heart forever, even as he comes to embrace life again.  Treviño, as Marisol, gives an exuberant performance — the perfect foil for Hanks’s Otto.

A Man Called Otto paints an intimate, compelling portrait of grief, of the unbearably painful journey a human being takes after losing a beloved.  At the same time, it explores the grief experienced by anybody without someone close.  Otto represents all those who, in fractured communities where people are surrounded, even hemmed in, by others, live deeply alone lives and suffer unmitigated grief at the loss of the only “other”.

Whilst A Man Called Otto might sound bleak, it is in fact a poignant story of healing and restoration: of how the power of strangers and even of those we’ve known for years but never taken the time to get to really know can transform our lives through their persistent and generous humanity.  Though it is in many ways a small, intimate story of one man’s loss of his life’s love, its appeal lies in its universality.  Thoughtful, engaging, and moving, A Man Called Otto is a film not to be missed.