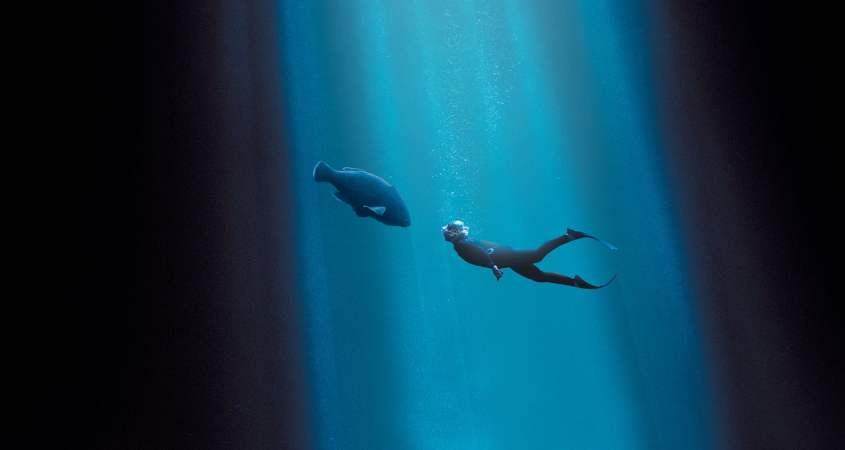 Marine biologist Abby (Mia Wasikowska) surfaces from her dive with a specimen of depressingly bleached coral and receives some worrying news that has her return to her home on the other side of Australia.  There she revisits her upbringing with her indomitable mother, Dora (Radha Mitchell), who introduced her to the marvels of the natural world and taught her to be fearless in protecting it.

Much of the story is revealed through adult Abby’s flashbacks, beginning with her memories of her eight-year-old self, played by Ariel Donoghue, when she first encounters a magnificent wild blue groper whom she befriends, and then on through her teenage years, where Abby is played by Ilsa Fogg.  Throughout those years her friendship with the blue grouper deepened until the day when that friendship was put to the test.  Now Abby’s back in the remote bay where her future career was shaped, to care for her ailing mother (played by Liz Alexander) in the home of her birth, surrounded by wild bush and overlooking the ocean where Abby first discovered the mysterious world beneath its surface.  As for the blue grouper, so important to Abby, she hasn’t seen him since that fateful day long ago.  Seems he’s gone forever.

Blueback is a luscious, visual treat, revealing the extreme worlds of Australia’s red dirt outback and her seas.  Through Dora and Abby, we are taken into Australia’s oceans to visit some of its marvels, evolved over many millions of years and living in ecological harmony with one another.  But we are also reminded that these remarkable creatures and their habitats stand to be wiped out if the greed of the powerful holds sway over those who would see them protected.

Radha Mitchell as Dora is a force of nature.  She will let nothing stand in her way when it comes to protecting the ocean and its inhabitants, and through her actions and words she ingrains in her daughter, Abby, the importance of never backing down.  Ariel Donoghue brings the eight-year-old Abby loveably to life as she conquers her fear and hesitancy to become a confident diver.  Ilsa Fogg is outstanding as the teenage Abby, encapsulating a shy, serious young person absorbing the influences of the most important people in her life, including her mother’s outrageous friend, Mac (Eric Bana), and her first, gentle love, Briggs (played as a teenager by Pedrea Jackson and as an adult by Clarence Ryan).  Mia Wasikowska, as the adult Abby, convincingly embodies the product of both her mother’s influence and the power of education that together have had her mature into a woman as determined as her mother to protect those in the watery world around us.

Blueback is a movie for all.  It beautifully presents an opportunity for reflection on the reality that it is what we do that makes a difference, rather than leaving it to them to do it for us.  A thoughtful, visually compelling vision of Australia in all its red and blue beauty, and of its stalwart defenders.