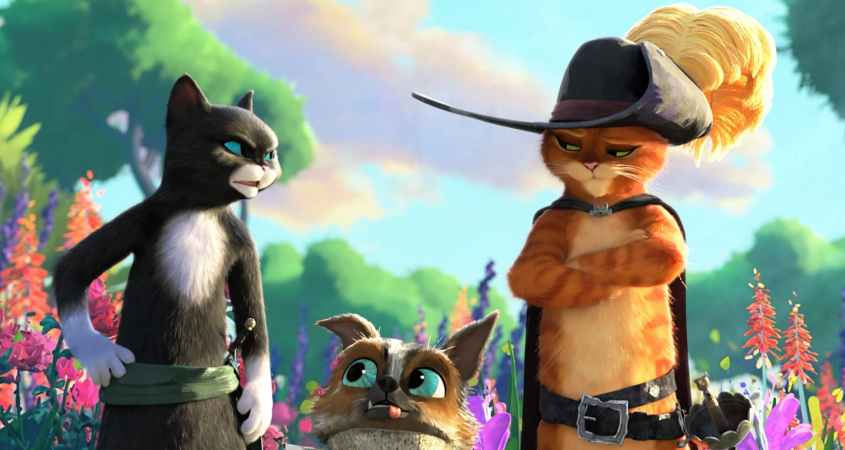 Swashbucklng adventurer Puss in Boots (voiced by Antonio Banderas) is living the high life of the fearless and beloved hero, defeating monsters and basking in the adulation of all when he discovers, to his horror, that he is now on his ninth and final life.  Overcome by a sense of fear and defeat he decides to follow medical advice, hang up his boots, and quietly retire to a cat refuge, with all the indignities that attend care en masse.  But then his miserable life changes when he learns of the opportunity of using the limitless last wish of a fallen wishing star to recover his lost lives and return to his former heroics.

Puss in Boots is naturally not alone in seeking the wishing star.  A cast of other keen and colourful starseekers ranges from Goldilocks (Florence Pugh) and her Crime Family of bears, to one formerly little Jack Horner (John Mulaney) — now the grotesque king of the pie industry — and his Baker’s Dozen gang.  These rivals display motives from the merely personal (such as the wish for a family) to the obscene (sole possession of all the world’s magic).

On top of that, Death himself — in the form of the Big Bad Wolf (Wagner Moura) — is seeking to extinguish our hero’s life; and Puss in Boots, having met him before, knows that he can’t cheat Death.

Puss in Boots is fortunate to have help in facing these various threats: principally the loyalty of a cute, dauntless chihuahua, Perrito (Harvey Guillén); and the love–hate of alluring professional thief Kitty Softpaws (Salma Hayek), with whom Puss in Boots shares some personal history.

The skilful animation and choreography of Puss in Boots: The Last Wish would suffice to make it a well-produced action animation.  But it packs extra punch through the emotional realism imbuing its lead characters and the sophisticated creativity of its humour.  Its imaginative story, plots aplenty, universal motives, and jokes and gags galore make Puss in Boots: The Last Wish an engaging animated action comedy for young and old.