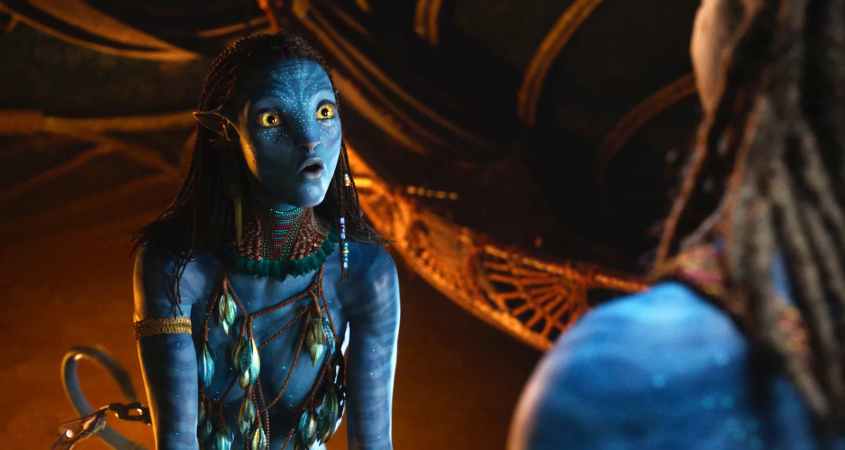 A decade after the events of Avatar, Jake (Sam Worthington) and Neytiri (Zoë Saldana) have a family in the Pandoran forest whom Jake will protect with his life: sons Neteyam (Jamie Flatters) and Lo-ak (Britain Dalton), daughter Tuktirey (Trinity Jo-Li Bliss), and adoptive human son Spider (Jack Champion) and daughter Tsireya (Bailey Bass).

When the skypeople return and reestablish a beachhead on Pandora, Jake and Neytiri coordinate air and land attacks on its infrastructure and its troop transports.  Jake’s tactical style giving him away, the skypeople begin a concerted hunt for him, embodying an avatar of the formerly dead Colonel Quaritch (Stephen Lang) to lead it.

Once Jake has persuaded Neytiri that the family’s best hope for surviving the hunt is to disappear, the family emigrates from the forest to seek shelter in an entirely new world, a shoreline village.  Its leaders are Tonowari (Cliff Curtis) and his wife Ronal (Kate Winslet).  And so begins the family’s exposure to the physical and cultural nature of another of director James Cameron’s worlds of the planet Pandora: the way of water.

But here, where people have evolved to spend time in the ocean, Jake and Neytiri’s family’s forest adaptations and culture invite exclusion.  And then Colonel Quaritch creates an opportunity to lure Jake out.

The original Avatar was imbued with obvious metaphors for any number of justifications and classic techniques for ecological vandalism and arrogant violent colonialism; but also for interspecies harmony, ecological sensitivity, community cohesion, and spiritual connections.  Neglecting none of these, Avatar: The Way of Water also uses Pandora’s cultures to remind us of many of humanity’s subtler qualities, from self-centredness, exclusiveness, bullying, and presumptuousness, to generosity, protectiveness, courage, and curiosity and wonder.  The film and the life journeys it follows are replete with such overlapping themes.  In a world whose non-human biology is, though mesmerising in its beauty, utterly fantastic, this thematic richness at times invokes a surprising sense of familiarity.

It is a long watch, but Avatar: The Way of Water repays attention, its visual world-building every bit as powerful as the original’s; its plot at least as challenging.  It helps to have seen the original Avatar, but this second in the series adequately fills in the background for those who missed it.  It’s one of those experiences that will stay in your memory for a good long time.