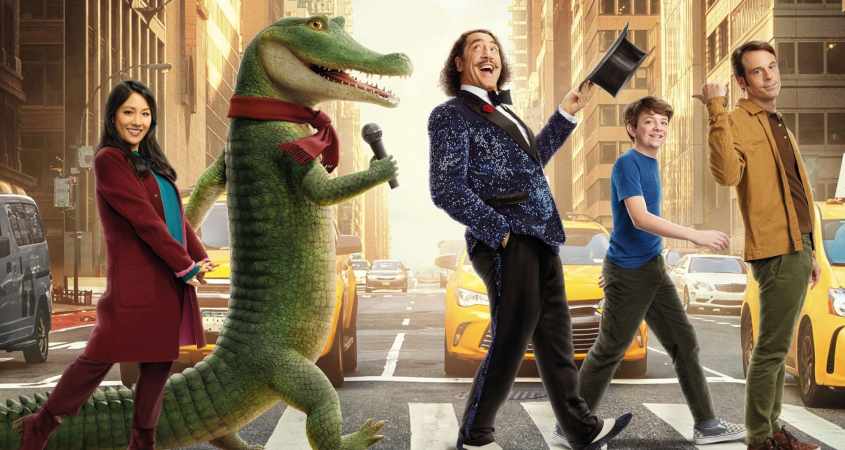 Young Lyle (Shawn Mendes) has problems.  He has no parents.  He lives alone.  In an attic.  In a big city.  And he’s a crocodile.  But he’s cheerful, energetic, and creative — and can he sing!

Upon discovering his talents, song-and-dance magician Hector (Javier Bardem), in his latest scheme for getting rich, has trained young Lyle to join him in singing on the stage.  But, excruciatingly shy despite his best efforts, Lyle clams up in front of strangers.  Hector, owing money everywhere and tending to shy away from difficulties, disappears, leaving Lyle behind.

When Lyle’s apartment is reassigned to a family — young Josh (Winslow Fegley) and his father, Joseph (Scoot McNairy), a maths teacher, and stepmother, Katie (Constance Wu), a writer of cookery books — Lyle must stay out of sight and hearing.  What will happen if the inquisitive Josh discovers him, and how ever will Lyle prove that he won’t eat anybody?

There’s a great deal of fun in Lyle, Lyle, Crocodile, and, although it features the computer-generated Lyle singing quite a few catchy songs in spectacular fashion, it’s less a musical than a family comedy; Lyle’s highjinks work in perfectly with its human characters’ live action.  Peppered with visual and verbal humour, the movie nonetheless readily avoids complete triviality.  Pursuing, without labouring them, themes of recognition, self-honesty, and redemption, it highlights the appreciation, acceptance, affection, and mutual celebration that can turn the unlikeliest combination into a loving family.

Hugely entertaining not only for Lyle’s outstanding musical talents but also for its ready supply of surprises, Lyle, Lyle, Crocodile is one entertainment you’ll look forward to enjoying a second time.