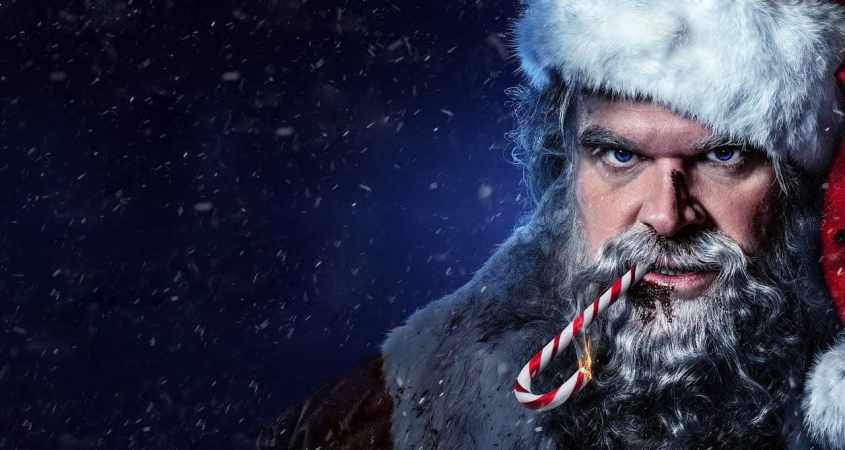 Santa Claus is in a bad mood.  It’s Christmas Eve, and he has a long night ahead of him, and he’s fed up.  Why bother, when kids are essentially greedy monsters who don’t believe in him anyway?  Perhaps after this Christmas he’ll give it all away.

Having fortified his grumpy self at the pub, Santa takes off in his sleigh.  Better get on with it and deliver the presents.  And so Santa goes from house to house dropping off gifts and sampling the goodies left out for him, until he arrives at the mansion of the Lightstones, where things take a rather nasty turn.  A group of mercenaries is enacting a plan to relieve the Lightstones of a fortune, and it will stop at nothing to do so.

Santa, caught in the mansion when everything kicks off, tries to get away, but no such luck.  He’s going to have to do something.  And then, to his amazement, he finds himself talking to Trudy Lighthouse, granddaughter of the matriarch, who staunchly believes in Santa and asks for his help.  And so help Santa does, but there’s nothing terribly jolly about how he goes about it.

Leah Brady as Trudy is a delight, a child any parent would adore for her good humour, simple wants, stout heart, imagination, and bravery.

The rest of the cast couldn’t have been better chosen. Those who play the villains bring their characters ruthlessly to life as vicious highly trained killers, armed to the hilt with rifles, pistols, machine guns, knives, grenades, and even nutcrackers.  They’ve never so much as heard of a guilty conscience.  Killing and maiming are de rigueur, as long as the money’s right.  On the other side of the fence, Trudy and her parents embody the goodness of those who have nothing much going for them in so dire a situation apart from their love for one another, and the imagination and chutzpah of young Trudy — oh, and the “no holds barred” Santa.  Then there are the thoroughly disagreeable members of their extended family, who really do deserve a bit of a slap for Christmas.  But the reindeer, with their gentle sweetness and patience, to say nothing of their lovely softness, melt the heart; they’re certainly welcome to land on my roof any time — without Santa, though, unless I’m having trouble with the neighbours).

If you think this is a Christmas movie for the children, though, you’ll need to think again.  It is definitely for late teenagers upwards.  It’s very violent: not so much menacingly violent as gorily violent.  That said, it’s great fun, although the next time you hear Santa’s “Ho! Ho! Ho!” you may be tempted to look over your shoulder rather than feel the warming of the cockles of your heart.

For an alternative, if rather deadly, take on Christmas, you may enjoy the sleighing ride that is Violent Night.