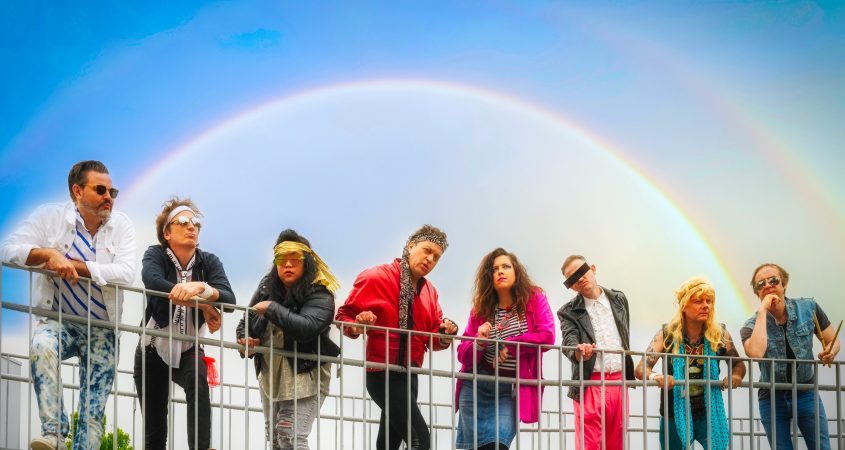 If you’ve ever thought that time is passing you by, and that your soul is trapped in the decade of your youth, spare a thought for some poor folk who are ACTUALLY stuck in the past, in arguably the greatest and most decadent musical period of all – the ‘80s.

International superstars Cellblock 69 are heading our way in December and I had the great pleasure of chatting to three of its incredibly humble members, frontman Duanne Le Corey Michaels, Guitarist Corey Sambori, and promoter/drummer Corey Rok SiXXXxxXXX.

Speaking to me from his modest castle in “generic Europe”, Le Corey Michaels admitted that he had known early on he was destined for greatness.

“I saw myself in the mirror and thought, ‘Duanne Le Corey Michaels… you are an absolute inspiration to myself’” he recalls. “I remember people like Elvis and other luminaries like Lennon passing and I recall thinking that the only man who ever came close to my own reflection was Liberace.”

It was that very understated elegance and masculine energy that further fuelled Le Corey Michaels’ pursuit of excellence. Few are aware that the band penned some of the most enduring pop hits ever written and inspired countless fashion choices and hairstyles.

“I was sailing around the Corey islands in the generic Caribbean writing songs, and even the Flock of Seagulls haircut was inspired by the wet look I would get in my hair when I stepped off the boat,” he says.

“I think Narcissism has become a dirty word. It’s actually from Greek mythology and there are a lot of ancient references to ancient Greece in my music, such as shoot that poison arrow through my heart referring to cupid.”

Other bands plagiarising their hits meant that Cellblock 69 had to call in the big guns – ‘80s lawyers in power suits who may not have had the techniques of 2022 but, as Corey Sambori reflects, at least the drugs were better back then.

Sambori admits that as well as taking legal action, he sharpens the ends of his guitar for the possibility of altercations with other acts. Extrapolating further, he feels the problem with music today is even more sinister than stealing songs.

“I believe it all comes down to cancel culture,” he reveals. “I see it in young people, the woke musicians of today shit on ‘80s culture, but where would we be without it? Without physical culture we wouldn’t be able to do our aerobic dance moves on stage. Olivia Newton John would be nowhere without it.

The palpable virility this modest group displays comes at a price. Many lovers have been left in the wake of these titans of pop including, in Le Corey Michaels’ case, Yasmin Le Bon (who sadly reunited with Simon) and then Jerry Hall (who later paired up with Rupert Murdoch). He does not appear to suffer from heartache, however.

Sambori of course had a well-publicised dalliance with Heather Locklear, later romanced by a Bon Jovi member with a similar name. He is wistful when recalling their brief union.

“Let’s just say she will always have a Melrose Place in my heart.”

Whilst most of the band reside in heavily secured overseas compounds to prevent obsessive fans gaining access to them, one member lives locally and is responsible for the Canberra tour.

Corey Rok SiXXXxxXXX is the talented promoter behind the band (literally behind them, as he is also their drummer) and shares the unique requirements of bringing such a massive act to our fair capital.

“Few people realise that Belconnen can hold a 100,000 capacity stadium rock arena. We of course assemble it every year exclusively for the band and have to pack it down afterwards as no one else can fill it. They would just be a speck on stage compared to us.”

So what exactly can punters expect from this show of shows?

Le Corey Michaels hinted at another nod to the late ONJ in the setlist.

“I wrote a movie and song called Xanadu and there has been some controversy over whether it sounds like another song of the same name.”

“I believe that in retaliation of David Byrne stealing Duanne’s big suit look we may play one of those songs that were, of course, stolen.”

Is there a dress code to attend? Le Corey Michaels just assumes that Canberrans will have a puffy leather jacket in the wardrobe “like a normal person” and simply wear whatever brightly coloured clothing they have to hand.

“No need to dress up! You want to look like you’re heading into the future; that’s what the ‘80s is all about! That’s the inspiration that the band gives to all of us.”

Strangely, Cellblock 69 have been promising that every tour is their last, much like their contemporary John Farnham (who Sambori cites as one of the biggest bullies in rock and roll). But this year they say they really mean it, so it’s advisable to buy tickets as soon as possible.

‘It’s very rare as we will be doing two last shows this year,”Rok SiXXXxxXXX acknowledges.