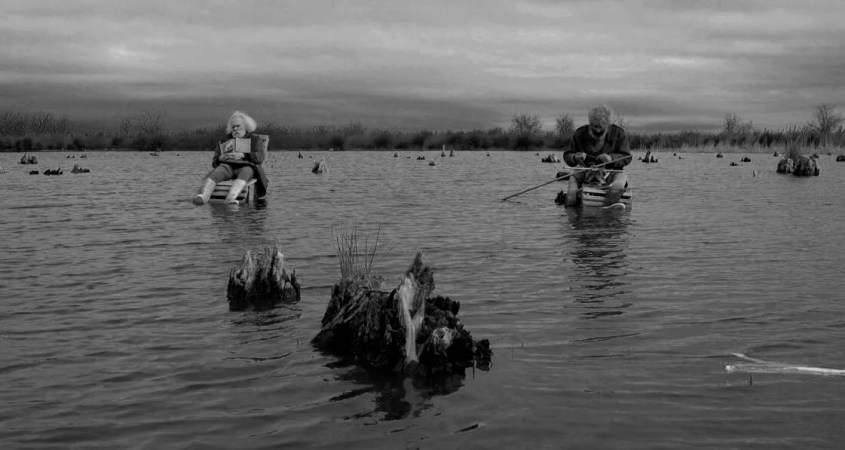 With the CSFF (Canberra Short Film Festival) 2022 under way, your intrepid reviewer ventured into the SF – Future Worlds screening, and found a few gems amongst many entries featuring characters we can empathise with or at least understand.

Story arc is always a challenge in short film.  It’s subtle in several of the SF–Future Worlds entries: Dot, an Iranian animation on divorce from real life in favour of marriages of convenience to mobile phones; Dignity, a Chinese animation focusing on the effects on others of freedom to refuse resuscitation; and Shudder, set in a war zone, a powerful parable of distancing, alienation, and destruction of empathy and awareness through electronically mediated interaction.  Yet each manages to usher us into the emotional world of somebody affected by blind worship of technology.

Hash Browns, a Western Australian vignette of a meeting, is a gradual revelation of virtual reality’s cold comfort.  And Mars, from Victoria, set against two strangers’ preparations for interplanetary travel, makes a promising beginning on an SF romance.

Several films beautifully render visual insights into important contemporary concerns that are rapidly racing away with us.

Big World, episode 1: Parking Ticket, an A.C.T. animation, highlights the overbearing power of unelected officials to tie us up in administrative knots and arbitrarily confiscate property; it certainly needs to be extended.

Starlings of the Hyperreal, from Victoria, takes us down the path of addictive VR.

Nothing’s Left, an Italian parable of a lifetime spent entirely within the cage of life-consuming consumerism, amusingly played on (English language) concepts to spotlight the cage from a range of viewpoints.

Finally of these, the Chinese film Uncaged, set in 2030, explores a continued lockdown such as has occurred over recent years with COVID-19. In lieu of friendships, ordinary citizens, forbidden “unnecessary social interaction”, resort to reliance for friendship and care upon a personal A.I. named A1; and, ironically, A1 may have decided to free itself of human dictatorship.

CSFF continues, with screenings at Dendy Canberra and Smith’s Alternative, to Sunday 20 November.  Take a look at the range of shorts still on offer.