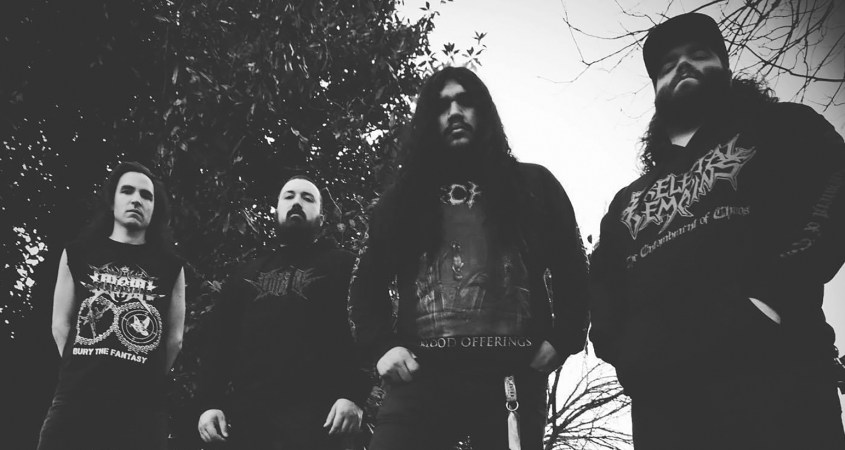 Californian 4-piece old schoolers Skeletal Remains will be blasting The Basement on Sunday, 13 November with Wretch, Deiformity, Point 17, and Anoxia (tix via Oztix). We caught up with guitarist Mike De La O who let us know who they are, what they stand for, and what’s in store for the Canberra show.

We started with Necrotized, then to Anthropophagy, and finally Skeletal Remains.

Demolition Hammer has been one of our biggest influences from the very beginning, especially lyrically. A lot of our earlier lyrics and song titles are pretty on the nose with Demolition influence!

Chris and I go way back; about 17 years now. His house was always the jam spot after school or on the weekends so we’d meet regularly to practise covers of some of our favourite bands.

Eventually we decided to try writing some material of our own with Traumatic Existence being the very first SR song. The rest followed shortly after that. Things happened pretty quick towards our favour in the beginning and we’ve been so grateful.

Definitely more in the old school way for sure. We’ve always worn our influences on our sleeves, never denying it. Our earlier stuff was more in the Death/Pestilence style with our latest being more Morbid Angel/Cannibal Corpse driven.

Some of the new music we’re working on is also taking a direction towards Suffocation, Hate Eternal, and Deeds of Flesh with Doug Cerrito playing a huge role.

Who/What are your influences?

For me personally, my biggest musical influences are Gorguts (Erosion of Sanity era), Hate Eternal, Morbid Angel, Suffocation, and Deeds of Flesh (Reduced to Ashes era).

For my lyrics, I take influence from negative life experiences, science-fiction, world history, and current events such as major catastrophes/war/disease etc.

So far this year alone has been one for the books. Almost a world tour with us hitting the U.S., Canada, South America, Europe, and soon Australia! Some stand out shows were those with Cannibal Corpse, Maryland DeathFest, Hellfest, and most recently sharing the stage with Cavalera. Honoured and grateful for sure.

What is it that you love about your scene?

I just love the total support we get from so many across the globe. We truly appreciate all that they’ve given us throughout the years. Even something as simple as buying a sticker is more than we could ever really ask for in support. We do what we do because of the fans. They give us the power and privilege to travel the world and perform for every single one of them.

Getting to meet and share the stage with Erik Rutan when we played Costa Rica with Cannibal Corpse. The dude is my biggest influence. So much of my playing style came from his music. There are many others as well; really hard to pick just one!

Our main focus is to finish this next record. We’ve also got an announcement that I’m stoked to share when we can! Aside from that, we’re going to continue on doing what we do best by playing shows and touring the world! We’re not letting up any time soon, that’s for sure.

Dave Chappelle, Bill Burr, and Pablo Francisco are our go-to playlists when hitting the road. You’ll always catch us quoting some of their best material!

“Rockstars” who believe they’re superior to all, and a lack of common sense. Had an experience with a pretty big name who couldn’t care less about anyone but himself. I was pretty bummed because I was a fan of his and his band but after this experience it left a bitter taste in my mouth. DON’T BE A DICK. It’s not that difficult!

Let’s keep this momentum in the underground going! The scene is the strongest it’s been since the heyday of the early ‘90s!