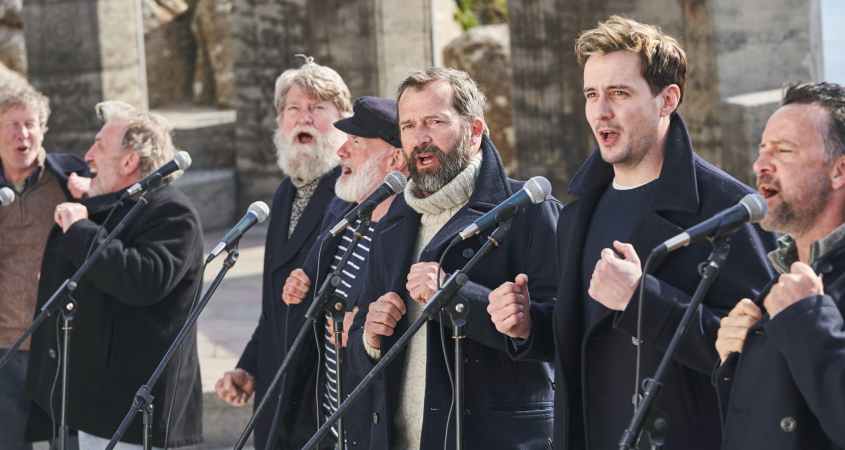 A year after the real-life a capella band Fisherman’s Friends has signed a record deal and become well known around Britain, the band’s leader, Jim (James Purefoy), is in grief over the loss of his father, Jago (David Hayman).  Whilst Jim’s mother, Maggie (Maggie Stead), is coping with her own loss by pulling together with those around her, Jim has attempted to drown his sorrows, and it has made him intolerant and irascible.  When the band, with the essential help of Maggie and young Tamsyn (Meadow Nobrega), auditions a hundred applicants to fill Jago’s place and so rebalance the sound, Jim takes against the successful applicant, Morgan (Richard Harrington), for… well, possibly just for not being Jago.

Against this background, the band’s record label, concerned with unfavourable publicity arising through band members’ political incorrectness, prepares to drop the band — unless it learns, with the help of a guide, to take greater care in speaking on the record.

And then Jim hits rock bottom; has a public falling-out with the new man, Morgan; and quits.

Through the emotional ups and downs of grief, spite, and early alcoholism, Fisherman’s Friends: One and All follows as the band, the family, and the community — as well an unexpected love interest — rally round to help Jim overcome himself and face a future bereft of his father.

This sequel to Fisherman’s Friends is another musical delight.  Along with a story that ends satisfyingly, Fisherman’s Friends: One and All provides plenty of great, energetic singing of traditional songs in lovely four-part harmony, quietly accompanied to give them extra oomph.  Delivering a message of optimism through letting others into our hearts, the film shows that life, love, and music beyond loss are possible.