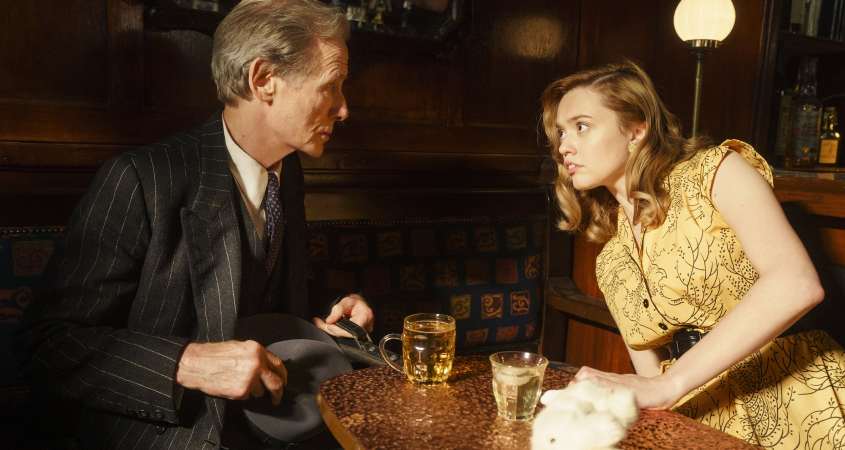 Having spent his existence fulfilling others’ expectations as a civil servant at County Hall, Mr Williams (Bill Nighy) learns that he has only months before death arrives.  Jolted into a recognition that his life has skipped by in quiet obedience to convention, and that his dismal existence is one that he has the power to discontinue, Mr Williams decides that he will, for at least a day, live.

Mr Williams is fortunate enough to make two new friends to remind him how to do so: a young man, a stranger, who introduces him to new entertainments and leisure activities; and, importantly, Margaret Harris (Aimee Lou Wood), a young woman who has just left the department Mr Williams heads at County Hall.  It is her perceptive honesty that motivates Mr Williams to realise an opportunity to improve the world around him.

Does Mr Williams succeed in surpassing expectations, in coming to life?  Here the movie treats us to a surprise or two and leaves us to ponder in retrospect his moment of transformation in its significance, its results, and its effects on others.

A further surprise is that Living isn’t tragic; it isn’t, strictly, even sad.  Poignant, as a friend put it, yes; and, for anybody wishing to avoid deathbed regrets, pointed, maybe; but the story’s innovative structure gives the events in Mr Williams’s life into a perspective revealing his need to live as it meets our own needs for endings that imbue dignity, meaning, and goodness.

As a tale that inevitably must touch upon such difficult topics as mortality, endings, grief, regrets, and irretrievable loss, Living pulses with significant rediscoveries and joys.  Tracing Mr Williams’s course in late life, we find him realising that opportunities lie in his next footsteps, appreciation follows in his previous ones, and it is for him to choose his way.

The lead characters’ quietly convincing ways, along with authentic period detail, have made of Living a film that draws us unreservedly into post-war England.  Engaging us through sincerity and irony, patience and understated exasperation, firmness and transformation, Living demonstrates the courage vital to real victories.  Curiously enjoyable.