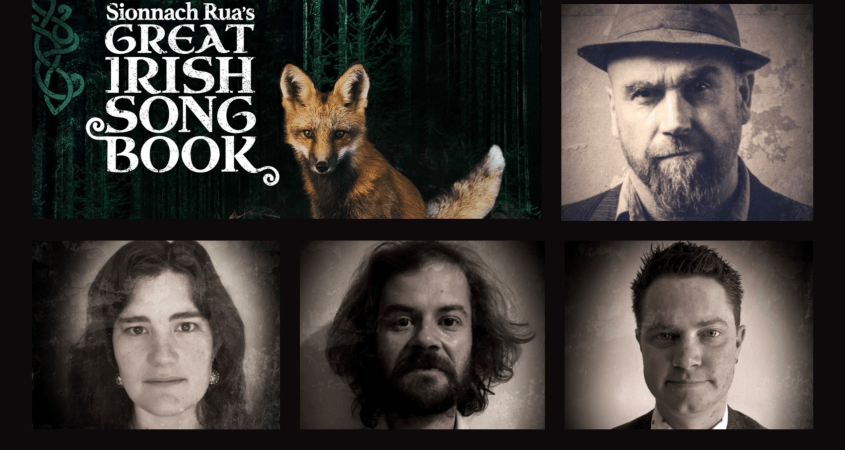 As the world begins to wake up and people are heading back to see gigs, what better way to celebrate the energetic and soul-soothing nature of music than with the Irish?

On 18 November, Sionnach Rua’s Irish Songbook will fill The Street Theatre with the sounds and spirit of Ireland via an evening of Celtic passion. The band consists of front man Gallie; Ruth Wise on fiddle; Paddy Montgomery on mandolin, guitar and bouzouki; and Sam Davies on uilleann pipes.

While the show features many generations of songs, for Gallie, the Irish tradition of storytelling will enliven the performance.

“We’re an oral tradition,” he says. “We have all these stories, and all these songs are passed down through the generations. We used to have things called a seanchaí, which is like a band that would travel from valley to valley bringing news. They might bring the news from over the valley where Donald Flaherty’s cow had triplets or something.

“But they’d also bring songs and stories. We’d learn the valley. Across the valley, you’d learn their songs.”

A love of stories continues to this day in Ireland.

“Because it’s raining every day, everybody’s indoors around the fire having a nice glass of whatever. That’s where the poetry, the stories, and the craic and the music happens.”

The band is named after a legend about an Irish witch who would transform into a fox and wreak havoc in Irish villages.

The pipes, the pipes are callin’

“Irish music is like that,” says Gallie. “Some of it is so primeval and really fast that you just can’t help but tap your feet and clap along. Then some of it is so sad and haunting.

“You can really feel everything. You can feel the wind and the rain coming down from the mountains; you can hear the rivers.”

As well as the mountains, forests, and rich greenery, there’s nothing that captures the culture like the energy of a cosy pub.

“We also love the craic, we love drinking and having a party. So, there’s also the happy, to-hell-with-all-this-misery, let’s just have the craic. It’s all about fun and heart and passion. We’re just standing under the beauty of Irish culture.”

All members of the band are acclaimed in their field, and the show features a wide range of different instruments such as fiddles, mandolins, tin whistles, and bouzouki. Gallie describes the uilleann pipes as the secret sauce.

“It just sounds like the belly of Ireland, you know?” he enthuses. “The sound coming from these pipes, you can just hear the years and years and the weather and the atmosphere, and you can feel the wind coming off the Atlantic Ocean when you hear these pipes playing. It’s a beautiful instrument.”

Sure t’be a grand ole night out

The show features the best of Irish music, with songs ranging from the traditional through to Van Morrison. Canberra audiences are in for a treat, with Gallie also feeling the excitement of live performance after years of disruption.

“It’s just great to be back out on the road and it’s great to see people are coming back out and enjoying music. It’s great just to be alive again. We’ve had floods, we’ve had fire, we’ve had pestilence, now all we’re waiting for is death.”

Waiting for death doesn’t seem too sombre a prospect, though, if the time is spent surrounded by the songs and stories of Sionnach Rua’s Irish Songbook. –

“As long as the audience brings their dancing boots, their laughing bellies, their clapping hands, their roaring hearts, we’ll all have a fecking great night.”

Sionnach Rua’s Irish Songbook will be playing at The Street Theatre on Friday, 18 November at 8pm. Tickets are $49 via thestreet.org.au