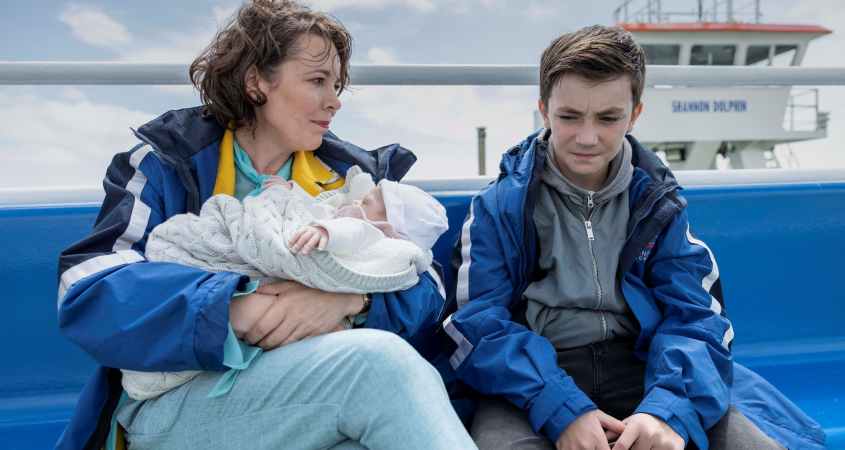 Joyride pits an 11-year-old boy, Mully (Charlie Reid), against a desperate new mother, Joy (Olivia Colman), for immediate use of a stolen vehicle.  The title, though it may suggest a car theft for a lighthearted romp, is really just a play on Joy’s name and the role of travel in the film.  Rather than something frivolous, Joyride is a kind of road trip along the highway of characters coming to terms with their family relationships.

Joy, a new mother, is asleep in the back of a taxi with her baby when Mully borrows it in a hurry.  Upon awaking, Joy insists that Mully drive her to her sister’s place, but Mully has a different delivery to make.  We soon discover that Mully is trying to retain his integrity even as his father, James (Lochlann O’Mearáin), is pushing him into theft.  James justifies theft from a charity on the basis that easy money has come their way by the grace of Mully’s recently deceased mother.

Joy too is struggling.  We soon realise that Joy’s desperation to reach her sister, Mags (Aisling O’Sullivan), arises from her sense of failure as a mother.  We learn that Mully himself knows a thing or two about babies and the difficulties of new motherhood.  And we discover the surprising intimacy that can result from acts of kindness between strangers.  Through consummate acting, Colman arouses and maintains our sympathy for Joy, even as Reid, in his film debut, portrays with surprising veracity the quiet heroism of a boy determined to do what’s right.

Deftly handling the gamut of emotions from anguish to elation, Joyride treats human frailties with the tenderness and the dismissal they may warrant, with many humorous moments along the way.  It’s a beautiful film with a soundtrack of gorgeous songs, and is all the more remarkable in being both Emer Reynolds’s debut feature film as director and Ailbhe Keogan’s as writer.