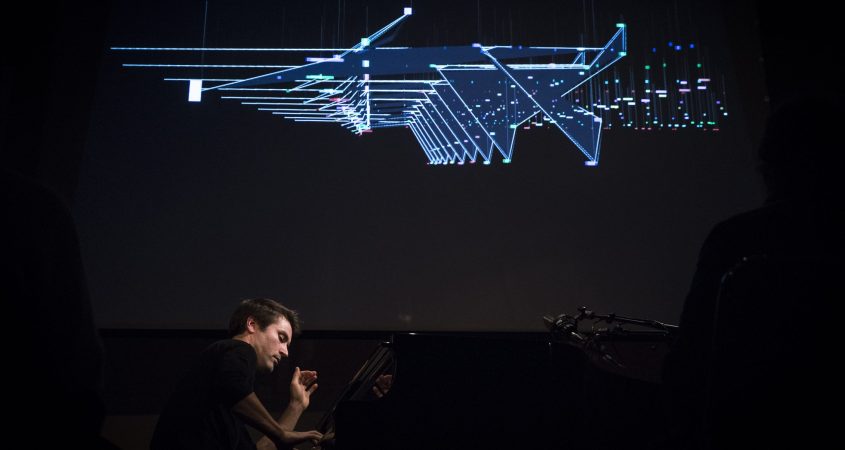 This month, French-American pianist Dan Tepfer is bringing his extraordinary live show, Natural Machines, to The Street Theatre. He seems like a man with all the answers, so we hit him with some questions.

For the last couple of years, Dan Tepfer has been engaged in a project called Natural Machines’ which merges free-form improvisation with computer programming and visual projections. His experimentation involves a Yamaha Disklavier piano, which Dan has digitally hijacked and redefined for the purposes of experiential interplay with his specially designed programs. When Dan plays the Disklavier, his algorithms respond, creating a unique interpretation and partnership between man and machine.

For those not already familiar, the Disklavier piano is like a modern-day player piano, with a digital mechanism that controls the musical elements. You may have seen them in airports or hotel lobbies, playing pre-programmed songs, to create ambience. When Dan realised he could feed real-time input from his computer into the instrument (which is not its intended use), it was a breakthrough moment that birthed the concept of Natural Machines.

He summarises the idea for the project as a musical exploration into the the intersection between natural and mechanical processes.

“I do free improvisation at the piano, and programs I’ve written on my computer interact with me in real time as I’m playing, both musically and visually. I love it because it feels like very new territory, and it’s exciting to be exploring it.”

It comes as no surprise that Dan has a background in computer programming, given the pivotal role it plays in the Natural Machines project. Add into the mix that he also holds a degree in astrophysics, to accompany his master’s degree in jazz piano, and you start to understand the level of intricate complexities that Dan is operating on. It seems Dan’s life, much like this project, is a collision of worlds between art and science, which, according to Dan, is exactly how it has always been, and always should be.

“Great art is naturally both [art and science] at once, not one or the other. No one who has really studied Bach would deny the science aspect of his work. But that’s not true only of Bach; it’s also true of a composer like Ligeti, or Bartok, and definitely true of John Coltrane and Steve Coleman, too.”

He continues to explain, “My most important focus in this project is making sure that the music is strong, on its own terms. I’ve spent my life performing Bach and playing jazz standards, so there’s no way that I would be happy presenting only a science project.

“However, if I can find something that is both at once, that is something I can get excited about.”

When Dan performs live, every show is a unique journey of discovery and creativity. Not only are the algorithms interacting and responding to his actions in a musical sense, but they also interpret them into a stunning animated visual art display that is projected on large screens on the stage. The visual effect is other-worldly, and brilliantly compliments the music to create a truly immersive experience.

In Dan’s words: “When I create these algorithms, I think of them as little planets. Each algorithm has different gravitation from other planets, and the atmosphere might be thick or thin, but each time you land on these planets you need to find a way to dance. That moment of pure discovery when I am first entering that new planet is so magical. The piano is creating the composition with me.”

Dan is excited to bring his Natural Machines show to The Street Theatre for the first time, and hopes the audience engages and enjoys the show.

“Most of all I hope it takes them on a journey. I want my music, and my shows, to be transportive, to pick you up, take you on a ride, and gently put you down in a different place, hopefully changed.”

Where: The Street Theatre

This concert is supported by the ACT Government Amp It Up! Initiative.