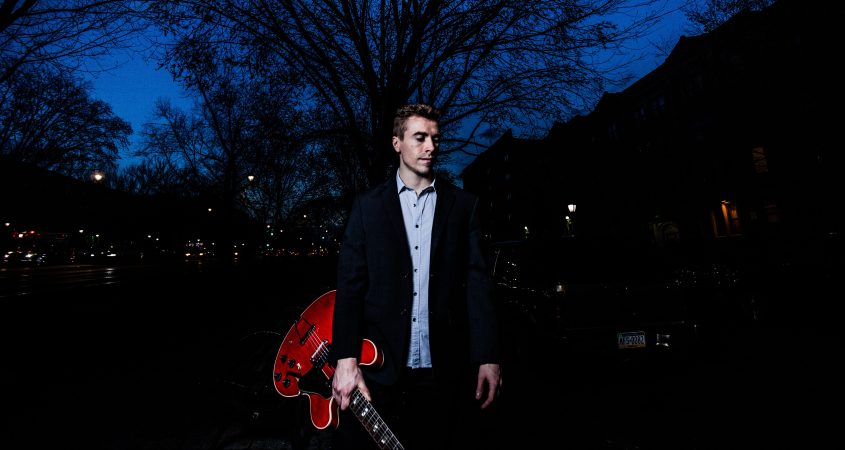 This month we spoke with award-winning guitarist and composer, Quentin Angus, about the state of the world, his upcoming Australian tour, and the inspiration behind his new album, The State Of Things.

For a lot of people, jazz is something you either understand or you don’t. It can be a cryptic door, and where some can’t quite work out the lock, others will walk straight through and won’t ever look back. For Quentin Angus, jazz is a way of life that is embedded in his DNA, and he wouldn’t have it any other way.

Born and raised in the small town of Eden Valley, South Australia, Quentin started playing guitar at the age of four, and has not put it down since. His obsession led him on a journey from his small country town to New York City, where as an Associate Professor of Music at the University of New York, Quentin now lives and breathes music. Considered by many to be the jazz capital of the world, Quentin has been soaking up inspiration from his New York City surroundings.

“It’s amazing!  he enthuses. “It’s the best place to be in the world for jazz. It’s super competitive, which really makes you question what your contribution to the music is, and what is special and unique about your playing. It is a very inspiring place to be. You also have access to the world’s top players, 24/7.”

This access has proven beneficial for not only seeing the world’s best musicians perform, but also playing with them, which is something Quentin has taken advantage of on his new album, The State of Things. The key players tasked with bringing the songs to life with Quentin were Nate Smith (drums), and Michael Mayo (vocals), two contemporary musicians well-versed in not only jazz but also soul and R&B. The process of compositional collaboration was somewhat new to Quentin.

“Michael Mayo wrote the lyrics, but I had specific stories I wanted to tell in each song, and I explained each theme to him before he wrote them. [The title track] The State Of Things is a reflection of various social, political, and cultural issues we face, and includes actual news clippings layered over the music, which we use when playing live. The words that Michael wrote for that are particularly powerful.”

Released earlier this year, the album represents both modern day issues, and a return to the life experiences that inspired Quentin to start playing in the first place.

“This record was all about connecting to the roots of why I play music, what inspired me to start playing, and really just trying to express my life experiences in music. I wanted the music to come from a place of pure inspiration and expressing emotion, and not thinking about the time signature, key, or scales I was using.”

He continues to explain how the heightened political climate of the US has influenced his music.

“I am very invested in politics, human rights, equality, and inclusion. I think that as artists, we need to reflect the world around us. Right now, we have many issues plaguing us, such as global warming, wars, democracy itself crumbling in various parts of the globe. I think if you are not talking about this, or using your voice to bring light to this, then you are not reflecting the current climate adequately.”

Quentin is bringing songs from The State Of Things to The Street Theatre for a night of inspired and insightful entertainment. He also has a very personal story to tell, in the form of a song written in honour of his daughter, Miia. He reveals:

“It is set to a recording of her heartbeat from when she was in the Neonatal Intensive Care Unit. She was born at 24 weeks, at only 450 grams, and stayed in the hospital for five months before we could take her home.

She is two years-old now, but I realised I was still processing her difficult entry into this world and wanted to express this journey in music.”

Quentin is also very excited to be working with his new touring band, which includes the stellar vocalist, Jo Lawry. Be sure to catch him live before he disappears back to NYC.

WHERE: The Street Theatre

This concert is supported by the ACT Government Amp It Up! Initiative.