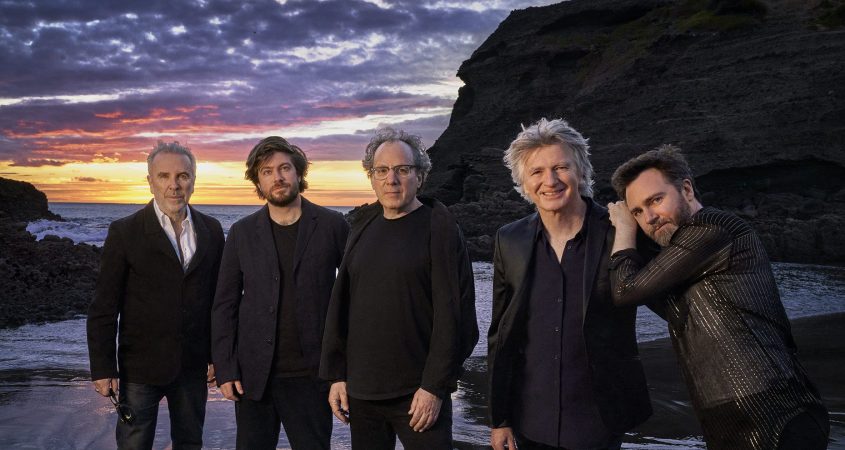 The long wait is finally over as Crowded House head to Canberra as part of their highly anticipated Dreamers Are Waiting Australian tour. We took advantage of the opportunity and spoke with founding member, Nick Seymour, to find out what’s been happening in the Crowded House universe lately.

It’s 6pm here in Australia as I wait for a phone call from Crowded House bassist, and (as I soon learn) all-round nice guy, Nick Seymour. He is calling me from the small town of Sligo, which is located on the west coast of Ireland, where Nick has resided for many years now.

Having never been to that part of the world myself, I’ve no idea of the time difference, but he seems chipper enough and not at all put out or inconvenienced by the obligatory press interview, so we are off to the races, so to speak.

As mentioned, I’ve not been to that part of the world so I’m willing to take it at face value when Nick informs me that the glorious Sligo is both a town and a county, much like Cork, only better. At the risk of offending the good people of Cork, I hastily agree. After all, how many world-famous Aussie expat musicians can Cork boast of? I hazard to guess…

Nick asks if I am somehow linked to the famed Eckersley’s art supplies stores across Australia, which unfortunately I am not. Given he is a well-known visual artist, having created all the Crowded House album covers, he tells me they do great work, despite having to deal with awkward artists as they explain about needing “rabbit-skin glue or weird print-making devices”.

I assume this all to be true, but given I am a life-long fanatical Crowded House fan, I’d believe anything at this point. Probably best if I get straight into question-time before I expose my fan-boy status and do something stupid like start singing Better Be Home Soon. OK, let’s get down to business.

Crowded House have released seven studio albums over the span of their 35-year career (give or take), traversing many peaks and valleys along the way. Back in 1996, at the height of their popularity, the band famously said farewell to the world, on the steps of the Sydney Opera House, in one of the most memorable concerts in Australian history. I was there, and odds are you were too, or perhaps you watched it on VHS, if you’re old enough to know what VHS is.

After the first hiatus, which also saw the tragic loss of drummer and fellow-founding member, Paul Hester, the band re-formed to release two further albums, Time On Earth (2007), and Intriguer (2010), before again, biding us farewell. Now, the band is back yet again with their latest album, Dreamers Are Waiting, and a new band line-up that features not one, not two, but three Finns.

Front man and main songwriter, Neil Finn, has engaged the services of his two sons, Liam and Elroy, to fill the guitar and drum slots which, says Nick, was always on the cards.

“I always knew at some point that the next generation would come on board,” he says. “In our history, and in my experience of working with the Finns, I was very aware of the legacy of Split Enz, where Tim (Finn) called up Neil and said, join us. Neil, who was 19 years old at the time, steps up to the plate and starts writing their hits and suddenly it was open season,” Nick chuckles.

He continues down the Finn-timeline: “Neil formed Crowded House with Paul and I, and then remembers how fantastic the relationship with his brother was, in terms of writing, so he asked Tim to join us.

“Then, after we split up, Neil tries to reinvent that muse and he realised he writes perfectly with Liam, his eldest son. And in the void of having lost Paul, and needing a drummer that has that sensitivity, Elroy stepped in perfectly. So, it makes sense to me that there are always Finns coming and going.”

Listening to the latest album, Dreamers Are Waiting, it is evident that the young Finns have injected a new level of energy and excitement to the band, along with long-time producer Mitchell Froom who has also become a full-time member. With recent singles, Playing With Fire and To The Island, the classic Crowded House magic is ever-present, but is now accompanied by nuanced groove and quirkiness, signifying rejuvenation and an element of good old-fashioned fun.

Nick affirms his endorsement of the new line-up as he tells us: “They step up to the plate, energy wise. Liam is known for his incredible, belligerent energy that he really delivers. And with Elroy, as a drummer, it is imperative to be touch-sensitive when playing a ballad, then absolutely jumping out of your skin when playing a rock tune. He is great at that.”

The show must go on

The upcoming tour is coming to us a little later than expected, due to an unforeseen rescheduling. Nick recalls:

“We had started our Australian tour of this album earlier this year, but Neil contracted Covid and we had to postpone some of those dates whilst he went into isolation.

“So, this is a catch-up tour to honour our obligations, and we have added a few more dates as well. It’s been a funny situation to navigate, particularly as a touring musician. We’re all dying to play shows but there are realities to how we manage it all.”

Having just finished a hectic European tour, the band will be in top gear and ready to rock when they hit our shores. They have recently played some huge festivals, such as Glastonbury, and the Pinkpop festival in Netherlands, but according to Nick, he will feel more at home in front of Australian crowds, where it all first began for them.

“I think the best part of touring Australia is that we’re going to regional areas that I haven’t been to since the band first started touring, with just me, Neil, and Paul,” he says. “We’re playing Albury-Wodonga, and I’m from Benalla, which is not too far away. I haven’t been to that part of Victoria for 30 years or so. It’s at that time of year when it’s not too hot, it’s not yet summer, so I’m really looking forward to breathing the air and looking at the diamond light.”

Crowded House are bringing their exciting new line-up, and their swag of new songs to Stage 88 in November. Be sure to grab your tickets before they run out.

One thought on “The Dreamers Are Waiting For Crowded House”