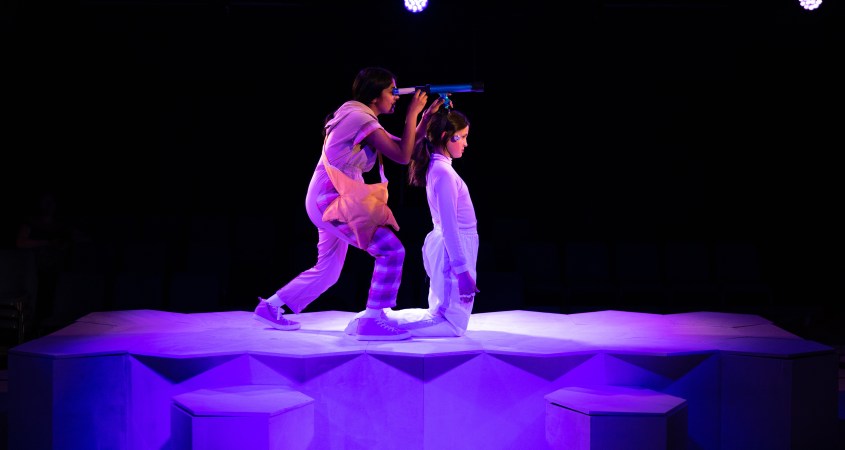 Jerry is the sole child in his class who has not been genetically “designed” for certain strengths and thus a designated career, and the only one without a robot as a primary companion.  In fact, he has no friends at all, which is what leads him to do the unthinkable and introduce a mysterious, possibly illegal, new friend to his classmates.

Jerry’s new friend, though, comes to realise that he is missing something essentially present in humans.  Interpreting that as a soul, he leads the class’s robot companions to demand souls of their own, and the children for the first time must think for themselves, face their fears, and solve the problem of a robot rebellion.

Performed by Canberra Youth Theatre under the direction of Jena Prince, assisted by Caitlin Baker, Kate Walder’s Soul Trading serves as a worthy caution about overlooking the nature of our humanity, tackling some serious questions about human connection, imagination, and drive.  Yet its script has much amusement to offer; it’s a linguistic delight, with many clever lines.  And what may appear to be a simple production has taken some fancy footwork on the part of a costume and set designer, lighting designer, and stage managers, not to mention a notable and impressive feature of the production, sound design.

Coordination between movement and sound was in fact vital to the production, and it was impressive, especially in a very young cast.  Some lines were difficult to hear even in the front row, but a little more training in voice projection or a little microphonic help will soon overcome that.

Exhibiting faultless memories for their lines, the actors also displayed perfect timing, even making a clockwork marvel of busy changes in scenery with the lights down.  The entire cast of twelve acquitted itself well, with commendable commitment to its roles.

Now celebrating its 50th anniversary season, Canberra Youth Theatre plays an important role in readying young theatre performers for bigger things as they tackle challenging issues.  With intelligent productions such as Soul Trading, that tradition is sure to flourish.