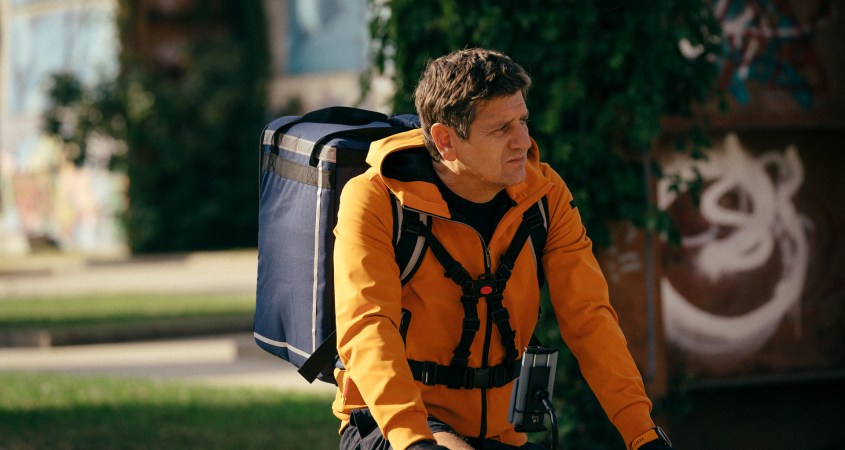 This clever film’s little jokes, all the way from its title to its final scene, strike you in so many ways, both during and after viewing it, as delightful.

As On Our Watch begins, Arturo (Fabio De Luigi), who has devised an algorithm for working out which employees may be dispensed with, falls victim to his own software. It has decided he is now superfluous, a decision Arturo’s manager is obliged to implement without appeal to reason or humanity.

As the tale progresses, the irony in this promising start only grows: in beautiful buildings bizarrely devoid of humanity, Arturo is politely invited to sit, to wait, to walk “just there” by artificial intelligences; his reputation is trashed by algorithms out to “help” him; his closest human connection falls to a computer-generated image. It gradually dawns on Arturo that he has helped midwife a monster.

Virtually unemployable by dint of having been dispensed with, Arturo takes on a “job” delivering takeaway meals for technology company FUUBER. His performance monitored by a computer program connected with his new wristwatch, Arturo finds that it’s a job so unreasonably demanding that by the end of a gruelling first shift he has earned less than nothing and effectively been demoted.

Fortunately, FUUBER offers some comfort in the form of a holographic companion that its artificial intelligence chooses for him on a one-week free trial an artificial holographic companion, named Stella (Ilenia Pastorelli), who is able to accompany him through the day. And Arturo finds he can tell this artificial creation anything. When, at the end of a week, Stella disappears, Arturo simply must find the money to pay for the expense of continuing to enjoy her company.

But Big Tech’s monopoly on control of access to information channels him into increasingly desperate measures.

De Luigi’s Arturo is a character we can all understand and feel for, and even the unreal (Pastorelli’s) Stella arouses our sympathies; but the tale’s funny side never lapses. All in all, and despite its serious underlying subject matter, On Our Watch is great entertainment.

Though it will make you think again about exchanging your personal information for promised convenience, this comedic gem, with its engaging cast of human and cybernetic characters filmed in futuristic locations in Turin and Piedmont, Italy, will tickle your tragifunnybone. As a very timely wake-up call, it’s one that you can laugh aloud over even as you realise just what a cheap commodity your privacy has, or could, become. And the film’s final irony for non–Italian speakers may lie in the literal translation of its Italian title: “And We Like Arseholes Stood By and Watched”.