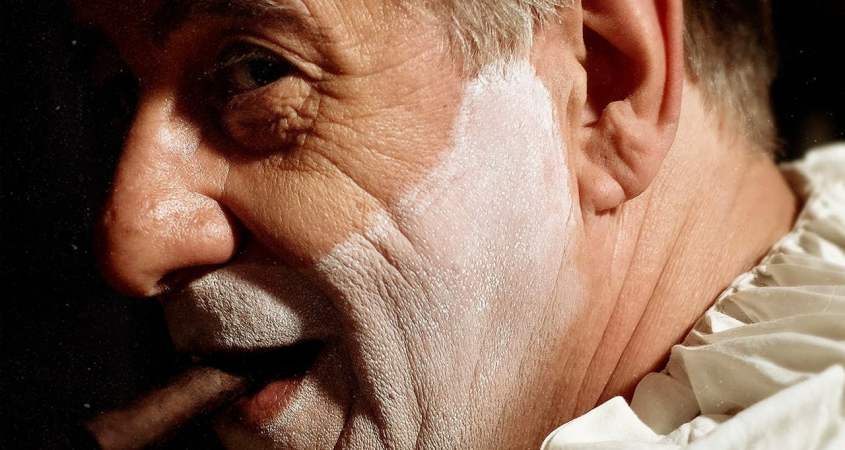 Successful stage comedian, play translator and adaptor, and playwright Eduardo Scarpetta (Toni Servillo) must balance his new productions — chiefly slapstick parodies of famous plays — and the classics that his regular audiences appreciate.  But his eldest performing son, Vincenzo (played by the real-life Vincenzo’s grandson, another Eduardo Scarpetta), recognises what Scarpetta is reluctant to: that times are changing, moving pictures have eaten into theatre attendance, and audiences also want entertainment that’s entirely fresh.

But Scarpetta is managing well enough until, despite legal precautions, saboteurs unleash mayhem at a performance and accuse him of plagiarising The Daughter of Iorio, by the master playwright Gabriele D’Annunzio (Paolo Pierobon), who takes Scarpetta to court.  Scarpetta’s world soon centres on the trial that will determine the fate of himself, his families, and creative freedom in Italy.  And that’s one trial not to be missed!

Servillo (who played Silvio Berlusconi in Loro and stars in this year’s Casanova’s Return as a film director who has lost his former seductive touch with women) superbly fills the role in The King of Laughter of the comedian, at times deadpan and at times clownish, who unfailingly beguiles and tickles even with his back to the wall.  And his conviction in Scarpetta’s passion for parody induces us to hang on the outcome of a dramatic court case whose repercussions affect us daily even now.  With fine performances and a well-constructed (if sometimes slow-moving) story, The King of Laughter provides moving entertainment as it documents a chapter in the history of Italian theatre and society through the true story of the unlikely character who defended satirically the right to parody the works of others.