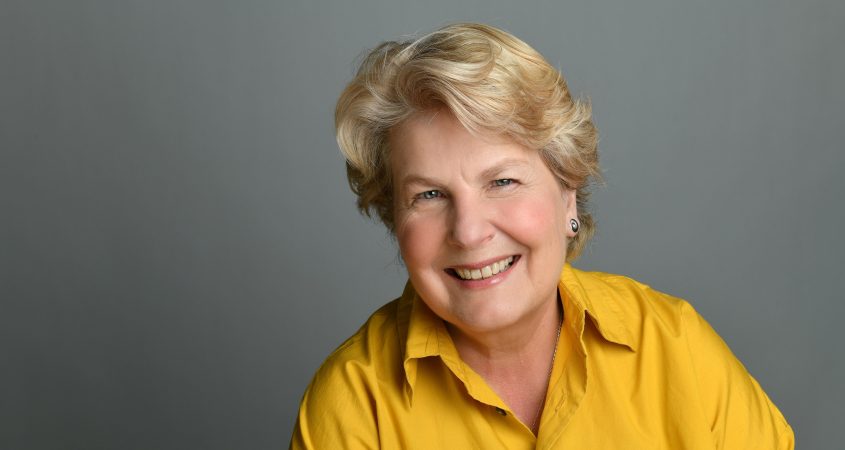 Hygge (hyoo-gah) is a somewhat ephemeral Danish term used to describe a state, or vibe, of comfort and cosiness, safety and contentment. With nods to Paul Rudd and Dolly Parton, there is perhaps no greater human embodiment of this term than proud Dane Sandi Toksvig.

The comic, author, and ubiquitous host – from cultural phenomenons The News Quiz and QI to The Great British Bake Off – is warmth personified.

The world is a happier place for her being in it, as you shall further discover. BMA chatted to Sandi to learn about a potential scoop on what’s happening to QI after Series Z; the surprising thing she likes to do with ugly Christmas decorations and Post-It notes; and, of course, what to expect from the cosy and chatty show she is bringing to Canberra.

Indeed, what better place to start than the new show, which is not so much straight stand up but more of live on stage hygge.

“Yeah, exactly; imagine a massive hug with hundreds of people,” Sandi reveals. “That’s what it feels like. And about a third of the shows the audience send me what they want to talk about.

“I love that; that you can be in front of a crowd of 1000-2000 strong, and still have intimate conversations with people.

“And there’s a strange thing about my audiences around the world. They’re not shy about what they want to talk about.

“We have fun. We have a quiz. I give out prizes. We talk about silly things, like ridiculous books you didn’t even know were for sale. And whatever the audience wants to talk about. And I tell you; the two hours goes in a flash.”

So, it’s a live AMA. And after explaining to Sandi that AMA stands for Ask Me Anything (she’s not a social media-ite; more on that later), talk turns to career confidence, and how long it took to open herself up to audiences around the world in such a fashion.

“I have been in telly for a very long time; my Dad was incredibly famous,” Sandi says. “I’ve always liked the give-and-take with an audience. I’ve always liked it with people. You know, good luck if you heckle me, because – O! – there’s at least five minutes in that.

“So I think probably ‘always’ is the answer. In terms of my career, [AMA] has been a sort of signature of the shows that I do, particularly my live shows.”

It will be a rare treat to witness Sandi in full flight on stage, a statement heightened by the fact it may not have happened at all. Whilst the pandemic has kept our international artist friends at bay for so long, it was an activity during the lockdown that has led to Sandi touring once more.

“I haven’t done a live show for a very long time, and I hadn’t intended to,” Sandi reveals. “But I did a thing which I uploaded on YouTube every day for a while in the beginning of the lockdown. We did it for two or three months. And I started getting messages from New Zealand, and Australia, and all around the world saying, ‘please, come and see us when the lockdown is finished’.

“And we just thought, well, of course. There’s nothing like the live audience. Yes. There’s lots of places I’ve never been to. I haven’t been to Canberra. And I’m really excited because I also get to discover the places where I am.”

Breaking a lifelong drought to our fair capital city will no doubt result in rapturous applause. However, in research for our chat, I learned from another interview that Sandi is apparently not a fan of applause. Comedy seems like an unfortunate profession to pursue if that’s true?

“You know, I don’t like to hang around going, ‘Yay! Look at me!'” she chuckles. “What I want the audience to always understand is that we made the show together. Without them, there’d be no show. So I want them to applaud themselves as much as anything.”

Another area of Sandi’s life that is filled with love and support is the relationship with her wife Debbie. As a professional psychotherapist, Debbie is able to give Sandi a very specialised form of artistic feedback.

“Yeah, she probably saves a life one person at a time, every day. She’s remarkable,” Sandi beams. “And she’s also my best critic. Oh my god; because she is a psychotherapist who watches my show, she goes, ‘Yeah, you know that bit there, that’s not working? It’s because the audience don’t believe you at that point.'”

“Yeah, it’s very annoying,” Sandi dryly states. “She’s always right. She’s THE best editor I’ve ever had in my life, because she does it from the perspective of the audience’s viewpoint of what you’re saying. It’s fantastic.”

On the topic of analysis, it’s hard to know what to explore of Sandi’s illustrious career in the meagre slice of time available. From her big TV hosting duties, to stand up, to her magnificent books, it seems she’s taken the mantra of ‘idle hands are the devil’s playthings’ to heart when it comes to her work ethic.

“I;ve never thought the devil had anything to do with it, but maybe that’s what it is,” Sandi says. “I just think the world is interesting, and we don’t have time to do all the things we’d like to do. If I had any advice for anybody it’s to say yes to the thing you haven’t done yet. And make every day count.

“I don’t know where I get that from but I passionately believe it. There’s always an amazing book I haven’t read or piece of music I haven’t heard.”

I suggest to Sandi that perhaps her parents are where her lust for life originated from?

“Probably,” she ponders. “Probably my father; he was an amazing broadcaster and journalist. And I come from a long line of writers on my father’s side. It’s pretty much everybody; my sister’s a writer, my brother’s a writer, my grandfather, my great aunt. It’s in us to be curious about the world, I think.”

However, don’t expect to see Sandi’s writing online any time soon. An area of life that she has close to zero curiosity about is social media. No TikToksvig for you.

“I don’t do social media,” she states. “Here’s what I think, darling. If you’ve got an urgent thought that you want to share with the world, do what I do; write it on a Post-it note and then put it somewhere random in the village. It’s like tweeting to one person. I put down my thought, and then I leave it somewhere on a bright Post-it note, and then I go and see if it’s gone.”

This delightful turn in conversation opens up revelations on Sandi’s playful life philosophy, one we all hoped would be true, and are overjoyed to find out very much is.

“The other thing I do, which I enjoy very much at Christmas, is I buy very, very ugly Christmas decorations.

“I bought a particularly ugly set of birds with sequins on it. And I placed them in random bushes around London, and then later went to see if they’d been taken.

“I like anything that’s really hideous, that you just look at it and think, ‘Wow… who even bought that?’ My best one that I purchased, I got for my brother. When you go to Denmark, one of the things that we love; we love a hotdog. There’s special vans that sell hotdogs, right? And they’re a specific shape. And I was able to find a Christmas bauble shaped like a hotdog stand. I mean, job done. It was the most shit gift, and he was thrilled with it.”

Sandi’s evident love of people and connecting with them, whether via her stage show or the magical gift of surprise ugly ornamentation, made her the perfect choice to fill the voluminous shoes of Stephen Fry as QI host. In sharing about this momentous opportunity, Sandi hinted at a potential future for the program post Z Series.

“Well, I’ve been a guest on the show lots of times, so I knew it really well. Stephen and I were at university together. I’ve known him since I was 19. So it’s possible I have a different view of him to the rest of the world. It’s possible, I just think he’s a silly boy,” she says, with evident love.

“I was excited. I don’t tend to try and compare myself to other people, thinking, ‘Am I going to be better or worse than them?’ I just think, ‘Yeah, I could do this’.”

“The most exciting thing was that no woman ever hosted a show like that. So that was good. I thought it was important to do it.

“But where we are now is, of course, the show is alphabetical. Stephen did the first 13 letters of the alphabet. I’ve now done seven. I’ll do the next six, then we would have done half each.”

And after the Z Series?

“Well, as you know from being a Dane, the Danes have three more letters (Æ, Ø and Å). I don’t think Stephen is aware of that. It’s a secret Danish weapon.”

Indeed, Sandi Tokvig is our secret Danish weapon for an oft confusing and cruel world, firing beams of positivity and connection wherever she goes. Be sure you don’t miss the lovefest come November.