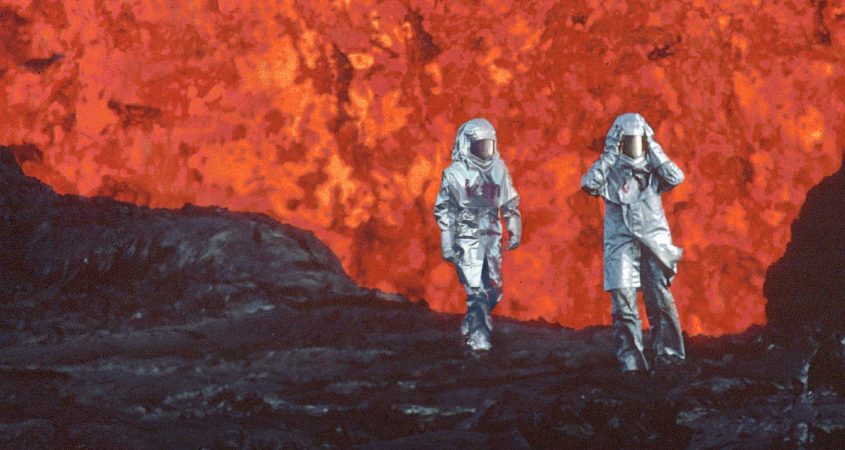 Fire of Love tells something of the story of French volcanologists Katia and Maurice Krafft.  Katia was a geochemist and Maurice a geologist, and from the late 1960s until 1991 they travelled the world to study volcanoes up close, taking gas, lava, and other samples from their study sites.  The Krafft’s photographic and video recordings brought unparalleled images to the world, and their work over more than two decades, so the narration tells us, increased our understanding of these extraordinary natural phenomena.

American documentary director and producer Sara Dosa wrote, filmed, and directed Fire of Love, which benefits greatly from its poetic narration by Miranda July.  The photography is stunning, and the soundtrack gives some idea of the terrifying booms and crackles accompanying erupting volcanoes.  The Kraffts, who were passionate about volcanoes, must have also been fearless.

Interspersed with footage of the Kraffts on volcanoes are footage and photos of them in their laboratory back in France, on holidays, on their wedding day, and in interviews.  They were clearly well-matched as scientists and presumably as husband and wife, although this aspect of their relationship is inferred in the narration rather than shown.

The Kraffts were unusual in their relentless quest to be as close to volcanic eruptions as possible, even walking over molten lava.  Just how necessary this sort of thing was to their scientific enquiry is something to contemplate, but volcanoes seemed to give them the sort of joy that nothing else did. It seems that nothing deterred them, that no risk wasn’t worth taking.

Those hoping for a deeper exploration of or romantic revelations about the Kraffts’ relationship may feel a little disappointed.  The film doesn’t explore their personal relationship beyond speculating about how they met and indicating that they discovered their common passion for volcanoes immediately and never looked back.  Nor does the film tell us just what the Kraffts’ research added to our knowledge.

As far as visual spectacles go, though, Fire of Love delivers in spades, and anyone who enjoys the phenomenal extravagance that nature has to offer will not be disappointed.  The up-close footage is especially stunning, even if you may find yourself wondering who would be insane enough to get that close to something that powerful, unpredictable, and dangerous.

The Stronger Than Fiction documentary festival’s second and final screening of Fire of Love is scheduled for 6:30 p.m. on Friday 26 August at Canberra’s Dendy cinemas.