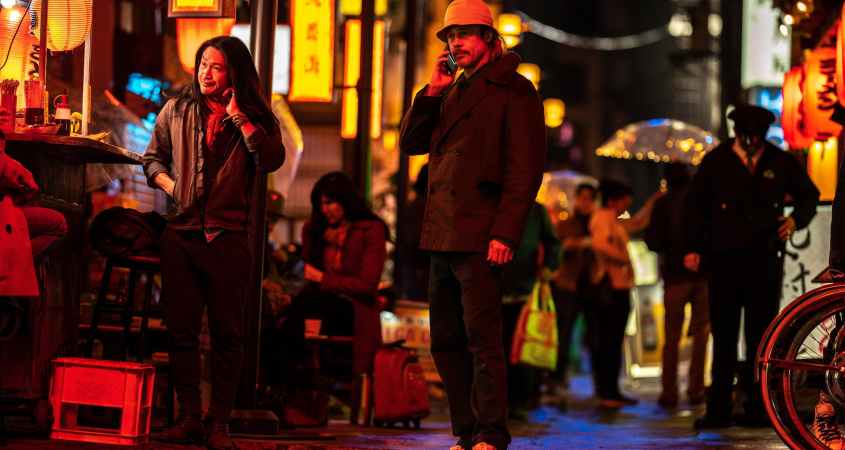 On board with his counsellor’s sage advice for attaining a more satisfying life, Ladybug (Brad Pitt), a thief for hire, takes the Tokya-to-Kyoto bullet train armed for his latest snatch-and-grab job with peace rather than with a piece, despite the contrary advice of his handler, Maria (Sandra Bullock).  Ladybug’s newly reflective character has profound effects — not always helpful ones — on five of those with whom he shares the train: assassins who come to share one thing: an irresistible desire to kill him.

Two of the latter have no bone to pick with Ladybug until he interferes with their primary mission, which is to deliver to White Death (an incredibly madeup Michael Shannon), the worst of all crime mobsters, White Death’s son after his release by kidnappers, along with a silver briefcase.

Though the amount of violence in the film as measured in blood may suggest a typical Tarantino bloodfest, it lacks that Tarantinesque character of brutality for its own sake; it’s unacceptable violence, yes, but it’s also understandable and not designed to provoke a visceral disgust.

And there’s an awful lot to love about this movie.  There are the little things, such as its unusual mode of character introduction; its soundtrack selection; the sound effects accompanying changes in our angle of view; the phenomenal size of the orchestra playing the score; and details in the closing credits.  But there’s plenty of fun more central to the action, including stunts and special visual effects, delicious karmic rebound, and fight choreography of surprising imaginativeness.

What makes the tale extra special is that plot developments and character developments, though truthful, have cheekily humorous contradictions built into them.  There’s plenty of fun in Ladybug’s use of his new philosophical perspective.  He wants no trouble, intends no harm, and certainly doesn’t mean to kill anybody; yet bad luck — quickly followed by trouble, harm, and death — follows him everywhere he goes, offering us plenty of laughs at his expense.

The movie is pacy too.  Its various twists and turns, and especially the connections that lead characters to act as they do, are rapid enough and complicated enough to fly by without time to process them.  This and the amount of fun along the way make Bullet Train worth watching at least twice over.