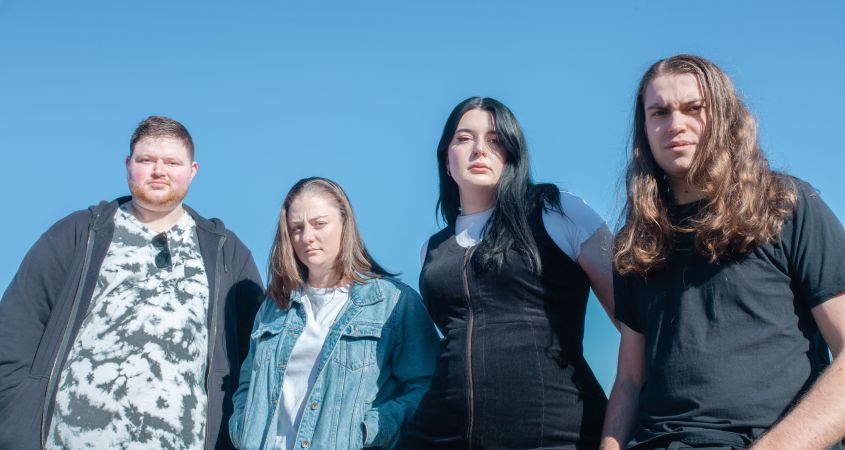 Canberra loud alt-rockers tinged with indie sleaze, Bad Lunar, have a scintillating new single out – See Ya Never – and a launch party at The Polo on Saturday, 6 August. As such, it’s time to catch up with the awesome foursome to see what makes ‘em tick!

We’ve got Tasha up front on vocals, Luke’s on guitar duties, Brie on the drums, and Daniel’s on the bass.

Once we passed the casual jam dating stage, a name was the hottest topic. Countless hours of band name generators down the drain. Only for Luke’s wonderful mum, Lesley, to throw the first two letters of each of our names to form “Bad Lunar”. How did she manage that? We cannot comprehend. It just fits.

It’s all Luke’s fault – Luke and Tasha had met years earlier looking to line up a project that never came to be; Luke and Brie played in a band then life got in the way; and Daniel looked like he could play bass. One group chat later we were jamming Arctic Monkeys in Luke’s garage!

Loud alt-rock with a touch of indie sleaze. Think demanding vocals, guitar solos we’ve been told could split seas, heavy bass lines, and precise punchy drums to nicely tie it all together. We think it sounds alright.

You’ll be able to check out our debut single See Ya Never on streaming platforms after it comes out on 29 July!

The bare bones for this one lived separately in Luke’s voice memos and Tasha’s notes app – both from August 2017 before Bad Lunar was even on the horizon. It fell into place, a story of indifferent reminiscence and farewell set to an upbeat sound. It quickly became our favourite song to experience with a crowd. We recommend listening to this one in the car at full blast.

Luke: I’d say my music taste is fairly eclectic, ranging from most rock varieties to pop, rap, and some electronic music. My main influences are based around bands like Muse (they initially got me into music and learning guitar), Nothing But Thieves, Royal Blood, and Rage Against the Machine.

Brie: I’ve been influenced by a pretty broad range of music, anything from punk and rock to country and pop. A lot of Green Day, Blink 182, Sum 41, and Incubus, but also really into drum or punk covers of pop or rap songs on Youtube.

Daniel: I listen to way too much Aussie pop/punk/rock – Sly Withers, Stand Atlantic, Between You and Me, The Dead Love, Slowy Slowly, and Ceres are all on my usual rotation.

What are some memorable experiences you’ve had as a band?

This one time at band practice, one of Luke’s neighbours dropped in on our rehearsal a little inebriated and demanded some good ol’ Acca Dacca. Luke very courteously obliged and ripped out some Back in Black, but we politely had to end the party after Smoke on the Water was requested.

There’s nothing better than playing a gig with our band besties. The Canberra scene is super supportive. We’ve met so many amazing musicians via local shows, whether playing or spectating.

It’s such a diverse scene here in our Canberra bubble, where we get to celebrate the best every genre has to offer in such a unique, local way. We’re all connected in this space – no matter how hardcore, funk, or folk you are.

Definitely when we all listened to the final master of our track together for the first time! It took us a bit longer than we anticipated but the payoff was so, so worth it.

We recorded with Guyy at Amberly Studios who really brought the track to life. It was the first time any of us had recorded professionally and we had a blast. The wait was worth it!

After we’ve released and launched See Ya Never we’ll probably hit up the studio again and record a couple more of our favourites – perhaps an EP is on the cards? We’ve usually always got a gig lined up so you can catch us live around town.

Making gross reverb-y sounds into the mic at practice. Threatening to kick Daniel out of the band for telling bad jokes. Literally anything. It’s actually a problem.

Come down to our single launch on 6 August! It’s at The Polo and we get to play with our mates Box Dye, Rental Snake, and Spouse. You can also chuck us a follow on Facebook and Instagram.