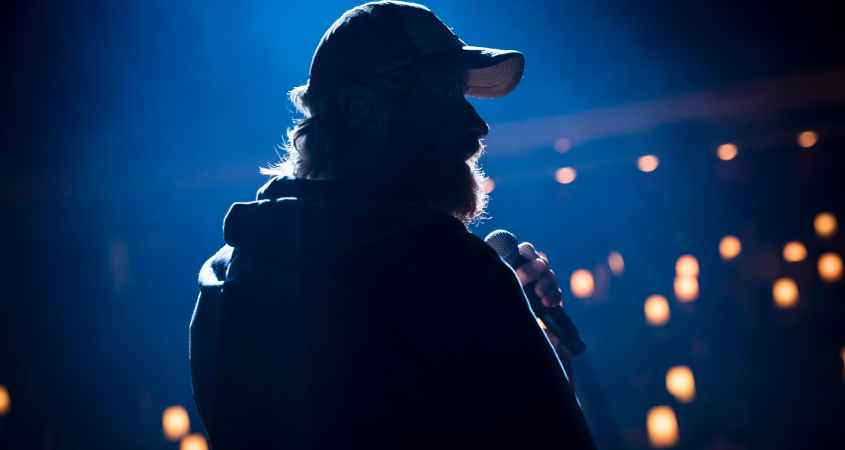 Having, as he puts it, stopped paying attention to life and his part in it, stand-up comedian Kasper Berntsen (Odd-Magnus Williamson, who also wrote the screenplay) has been operating on automatic.  He ignores the blandishments of his manager, Erik Elisabeth (Øystein Martinsen); exposes his audiences to jokes he’s told them before; and scarcely notices the pain in his life, till, all within a day, he loses his regular gig, loses his girlfriend, and receives a diagnosis of bone cancer — which finally brings him to realise he’s alive.

With little else to try by way of support, Kasper joins a cancer support group; but there he runs into a woman he has openly insulted, Maria (Sara Khorami).  More than that, the group’s very cheerfulness is something he can’t stand, and he quickly subverts the programme, with results that his cancer cohort loves, even if the group’s facilitator is less impressed.

Kasper knows that he hasn’t long in which to find a way to live life to the full.  His fellow cancer patients feel likewise.  For some, the challenge lies in altering perspective; for Kasper, the challenge lies in turning this most important life crisis into the raw material of new comedy — and recognising the joy and love that remain within his reach.

Though the film makes no attempt to evade the quiet despair, fear, and hope that inevitably pervade the lives of those with serious diagnoses, it manages to let its stars show the possibilities that lie within us even in such extremity.  Kasper’s increasingly genuine relationships with Maria, Erik Elisabeth, and the latter’s daughter, Anja (Ylva Bjørkaas Thedin), putting him back in touch with his feelings and theirs, give him a chance to embrace his full humanity and simultaneously to unleash his full comic potential.

Warm, heartfelt, and offering surprisingly much to laugh about, Nothing to Laugh About takes us on the journey of somebody who, with nothing to lose, proceeds to find himself and those aspects of his life most important to him.