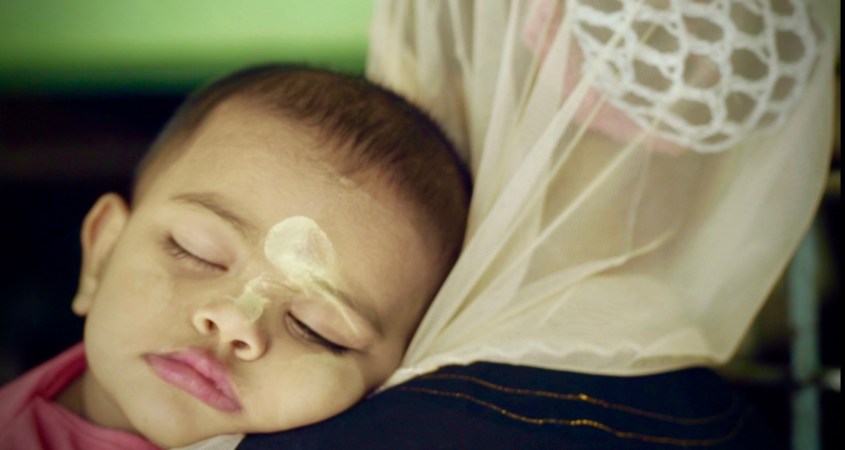 In a rural village in the Myanmar state of Rakhine, a Muslim woman arrives in dire straits at the clinic of Buddhist midwife Hla.  The woman is in the last stages of labour, and things aren’t going well.  Hla, unsentimental, sharp-tongued, and extremely capable, delivers the baby safely and saves the mother’s life with few of the most basic health-care tools that we in the West take for granted.

Hla is, in fact, taking a great personal risk in treating a Rohingya woman.  Myanmar is in turmoil.  Rohingya Muslims are persecuted as terrorists, their human rights have been removed, and helping them is dangerous.  Not only does Hla assist them to give birth — and set bones and treat all kinds of sickness, including typhoid fever — but she is also training Nyo Nyo, a Rohingya Muslim, to do the same.

Hla and Nyo Nyo’s relationship is complex.  Hla is almost constantly critical of Nyo Nyo.  But, if Nyo Nyo is going to be responsible for others’ lives, Hla needs to be a hard taskmaster.  On the other hand, these women have something of an affectionate relationship, and there’s no doubt that Nyo Nyo completely trusts Hla to manage every emergency.

It’s difficult to imagine living as these women and their communities do.  At the best of times daily life in this community, which lacks even the most basic infrastructure, is physically demanding.  But during the five years over which Midwives was filmed, the turmoil in Myanmar escalated into a humanitarian disaster, with Rohingya citizens subject to shocking persecution, removal of basic human rights such as the rights to work and to travel to town to buy food, and even murder by and at the urging of the military junta.

Yet their humanity and their social cohesion persist, and Hla’s midwifery service is one of its focal points.

Director Snow Hnin Ei Hlaing’s Midwives sensitively and beautifully tells the story of Hla and Nyo Nyo and of how these two remarkable women’s commitment to their communities supersedes their personal differences for the benefit of each other and all about them.

The second and final screening of Midwives is scheduled for 6:30 p.m. on 29 July 2022 at Canberra’s Dendy cinemas.  In late August, Stronger Than Fiction will screen the documentary Fire of Love.